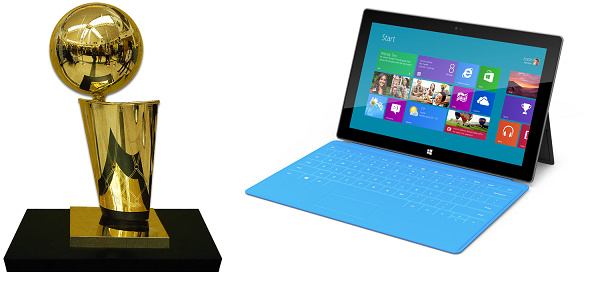 Which coveted item would you most like to get your hands on?

Even if you’re not a sports fan, you’ve probably heard that the Miami Heat, led by LeBron James, won the NBA championship last night over the Oklahoma City Thunder. The victory capped an impressive week by the much-maligned superstar, who silenced critics by finally stepping up when it mattered most. James led his team in scoring during each of its four straight wins, notching a triple-double in the clincher. He took home the Finals MVP trophy for his efforts.

Another big player had its reputation on the line this week, and also delivered multiple times. I’m talking about Microsoft, of course, which revealed plans for its new Surface tablet and Windows Phone 8 in two West Coast events. Both announcements marked the company’s renewed competition in areas where it’d been counted out by some. Though the Surface comes with some questions (including how it will impact partner relationships, how it will be managed by IT and, oh yeah, what it will cost), it could be a legitimate competitor to Apple’s iPad thanks to its light, thin body and innovations like an integrated kickstand and a cover that doubles as a keyboard.

Meanwhile, Windows Phone 8 represents a significant upgrade from previous versions of the mobile platform, with a new Start screen, a shared kernel with Windows 8, gaming updates and, crucially for enterprise IT, enhancements to security (secure boot, disk encryption), application deployment (a customizable company hub for internal line-of-business apps) and some level of device management.

Given that both the Surface and Windows Phone 8 aren’t expected to debut until at least the fall (no official release dates have been announced), and LeBron already has his trophy, this debate seems pretty simple. But Microsoft’s products have the chance to impact a multi-billion dollar market and revitalize a beleaguered brand (do I smell a new endorsement opportunity for King James?), so it’s worth asking the question: Who had the better week, LeBron or Microsoft?

Answer in our Facebook poll, or let us know what you think in the comments.