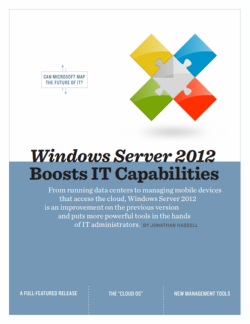 Sponsored by Dell and Microsoft

This chapter is included in the Can Microsoft map the future of IT? E-Book.

With Windows Server 2012, Microsoft is packing an unprecedented breadth of tools into its core enterprise platform – much more, in fact, than it has in in any previous version.

The latest edition serves up new PowerShell features, much improved capabilities to manage both virtual and physical storage and networking, deduplication tools, Server Task Manager capabilities and host-based Hyper-V replication. Also getting attention is the inclusion of Azure’s cloud-development tools, which is seen as a clear signal of Microsoft’s intention to shift away from traditional and costly server platforms and toward cloud computing. In fact, the company has taken to calling Windows Server 2012 its “Cloud OS.”

Beyond the new Windows Server, the company has rolled out System Center 2012 (presenting it as a management platform for the cloud as well as for hypervisors, the data center, automation and applications) and Visual Studio 2012 (aimed at developers creating custom software to be used across multiple platforms).

Jonathan Hassell is an author, consultant and speaker, and has a...Read More