Vendors are courting IT shops to host Exchange Server in the cloud. Before you relinquish control of your company’s mission-critical applications, know what you’re in for.

Today’s inescapable discussion of cloud computing obscures the fact that hosted Exchange Server messaging and collaboration services are not new. The first of these services appeared more than a decade ago, when the operative term wasn’t cloud computing, but Internet application hosting.

As early as 1999, Microsoft began secretly working with a handful of “application service providers” to test hosted services based on its BackOffice Server suite, which included Exchange Server and other elements. That same year, Microsoft and telecommunications giant Ericsson announced a joint venture to build, market and deploy Web-based applications on Windows NT Server and Exchange Server.

Although Microsoft lists only about 50 such partners in its Hosted Business Email and Collaboration Catalog, a Web search easily turns up many more. By 2008, Microsoft claimed it had more than 5,000 hosting partners of all types worldwide, more than 1,000 of which offered hosted Exchange or hosted SharePoint services.

The same year, Microsoft claimed its service provider partners supported more than 22 million hosted Exchange mailboxes. While impressive, that number has more than doubled today, according to estimates from market research firm The Radicati Group. 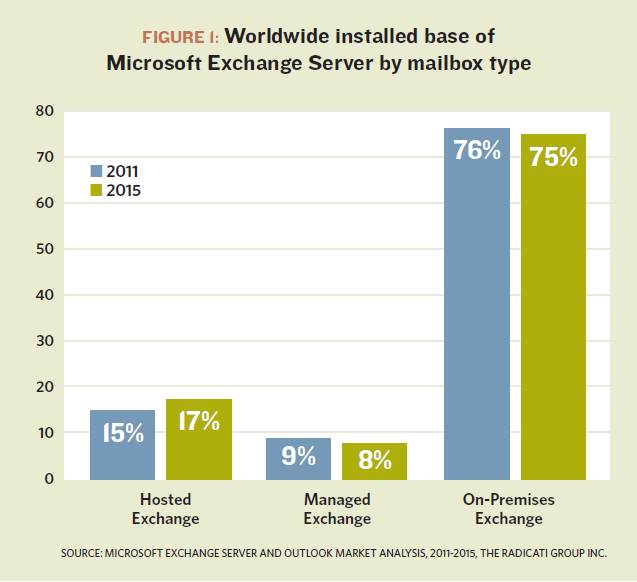 These numbers show that Exchange Server has provided a solid foundation for the launch of many hosted messaging vendors and services. Even so, the health of and outlook for the hosted Exchange vendor community is somewhat cloudy -- and not in a good way.

Part of the uncertainty lies in the competitive nature of the market itself. A large mix of vendors, each of which touts its own Exchange-based services, can squeeze margins and make differentiation difficult. But the biggest variable influencing the hosted Exchange vendor landscape is Microsoft and its increasingly aggressive moves to promote its own hosted services.

At one time, the term co-opitition was in vogue as a way to characterize vendor relationships that were cooperative and competitive. Although used less often today, the term still characterizes Microsoft’s relationship with its hosted Exchange partners.

As soon as third-party vendors began offering hosted Exchange services, in fact, they also had to worry about the threat of Microsoft offering its own hosted messaging services, which it eventually did with the Business Productivity Online Standard Suite (BPOS).

How to change Office 365 user passwords via PowerShell

Since offering its own hosted Exchange services, Microsoft has worked -- with varying degrees of success -- to support and appease hosted Exchange partners while soliciting business for its own Exchange Online services.

Microsoft has encouraged partners to offer enhanced variations of those services that, for example, target the messaging needs of specific vertical industry sectors, provide support for popular non-Microsoft client devices such as the BlackBerry device from Research in Motion (RIM), or combine Exchange messaging with other non-Microsoft applications.

The hosted Exchange partner community has been holding its own. And while it’s difficult to determine exact numbers, there likely are hundreds of vendors worldwide that build and manage their own server infrastructures on which they offer hosted Exchange. Some vendors -- including Intermedia, Sher-Web and groupSPARK -- market their own branded services as well as cloud-based infrastructures as platforms for white-label hosted Exchange services that partners can rebrand with their own company names and logos.

Microsoft has also enlisted many partners to resell -- not rebrand -- its Exchange Online and Office 365 services. While this does allow partners to realize an income stream, Microsoft doesn’t allow these resellers to manage the billing relationship with the customers they bring to Exchange Online.

Allowing Microsoft to handle the direct billing relationship can be a sore spot for many resellers who would prefer to manage that ongoing customer. In fact, the billing issue is a strong motivator for vendors to maintain an arm’s length stance -- if not a directly competitive one.

Can vendors ride the Office 365 wave?

While some hosted Exchange vendors are ambivalent about Microsoft’s role as a partner and a competitor, other vendors are fearful. The catalyst for this rising concern is Office 365, the successor to BPOS. Launched in 2011, Office 365 bundles the 2010 versions of Exchange Online, SharePoint Online and Lync Online with the Microsoft Office Professional desktop suite of productivity applications.

Microsoft offers different subscription pricing options for Office 365 to accommodate customer needs, from small business plans referred to as "P plans," to "E plans" for medium-sized and large corporations. Companies can purchase just Exchange Online for $4 per user per month. A full list of Exchange Online plans and a feature comparison can be found here.

There is little doubt, however, as to which hosted Exchange Server vendors are most at risk; those that offer only commodity messaging services, with little in the way of pricing, vertical market or geographic differentiation to protect them.

ABOUT THE AUTHOR
Dwight Davis has reported on computer industry technologies, trends and vendors for more than 30 years, first as a journalist and then as a software industry analyst. He spent several years as editor and editorial director of the "Windows Watcher" newsletter and has written extensively about Microsoft products and strategies. He currently works as a freelance writer and consultant.