Many long-awaited features and technologies are built in to Hyper-V. These enable Microsoft to compete with other server virtualization products on the market and provide incremental capabilities requested by IT organizations. These Hyper-V capabilities provide better support for host functionality, administration support, guest session support, and improvements in server reliability.

The broadest improvements made by Microsoft to the virtual host capabilities of Hyper-V are the core functions added in to Windows Server 2008 that relate to security, performance, and reliability. However, the addition of a new virtual switch capability in Hyper-V provides greater flexibility in managing network communications among guest images, and between guest images and an organization's internetworking infrastructure.

Also important is the requirement for the Hyper-V host server to run on a 64-bit system, to not only take advantage of hardware-assisted virtualization processors like the AMD64 and Intel IA-32E and EM64T (x64) but also to provide more memory in the host server to distribute among guest sessions. When a 32-bit host server was limited to about 4GB of RAM memory, there weren't too many ways to divide that memory among guest sessions in which guests could run any business application. With 64-bit host servers supporting 8GB, 16GB, 32GB, or more, however, guest sessions can easily take 4GB or 8GB of memory each and still leave room for other guest sessions, tasks, and functions.

Unlike multiple physical servers that might be connected to different network switches, the guest sessions on a Hyper-V host all reside within a single server. Therefore, the virtual switch capability built in to the Hyper-V Administration tool and shown in Figure 1.3 enables the Hyper-V administrator to create special network segments and associate virtual guest sessions to specific network adapters in the host server to ensure that virtual guests can be connected to network segments that meet the needs of the organization.

Hyper-V guest sessions can be administered by two separate tools. One tool, the Hyper-V Administration tool, comes free out of the box with Windows Server 2008. The other tool, System Center VMM, can be purchased separately. Some overlap exists between what the Hyper-V Administration tool and the VMM tool do. For the most part, however, the builtin tool enables you to start and stop guest sessions and to take snapshots of the sessions for image backup and recovery. The VMM tool provides all those capabilities, too. But, it also enables an administrator to organize images across different administrative groups, as shown in Figure 1.4. Thus, the VMM tool allows for the creation and management of template images for faster and easier image provisioning, provides a way to create a virtual image from existing physical or running virtual sessions, and provides clustering of virtual images across multiple VMM manage host servers. 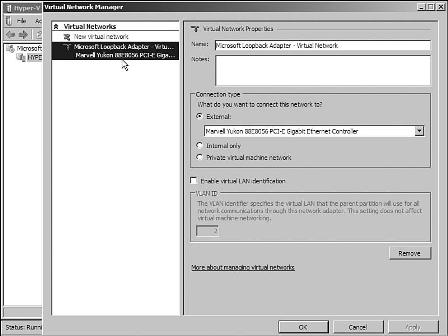 Support for non-Windows guests, such as Linux, was an indication from Microsoft that they are serious about providing multiplatform support within their Hyper-V host servers. Linux servers are not only supported to run as guest sessions on Hyper-V, but Microsoft has developed integration tools to better support Linux guest integration into a managed Hyper-V host environment.

More on guest session support and the implementation of virtual guest server sessions in Chapter 5, "Installing a Guest Session on Hyper-V."

Another critical area of improvement in Hyper-V is its support for capabilities that improve reliability and recoverability of the Hyper-V host and guest environments. The technologies added to Windows 2008 and Hyper-V are clustering technologies as well as server snapshot technologies.

Clustering is supported on Hyper-V both for host clustering and guest clustering. The clustering capabilities allow redundancy both at the host server level and the Hyper-V guest level, with both areas of clustering greatly improving the uptime that can be created for applications. More on clustering in Chapter 12 in the section, "Application-Level Failover and Disaster Recovery in a Hyper-V Environment."

Another capability added to Hyper-V for better reliability is the ability to take snapshots of virtual guest sessions, as shown in Figure 1.5. A snapshot allows the state of a guest image to be retained so that at any time an administrator wants to roll back to the state of the image at the time of the snapshot, the information all exists. This capability is used frequently to take a snapshot before a patch or update is applied so that the organization can, if need be, quickly and easily roll back to that image. Snapshots are also used for general recovery purposes. If a database becomes corrupted or an image no longer works, the network administrator can roll back the image to a point before the corruption or system problems started to occur. 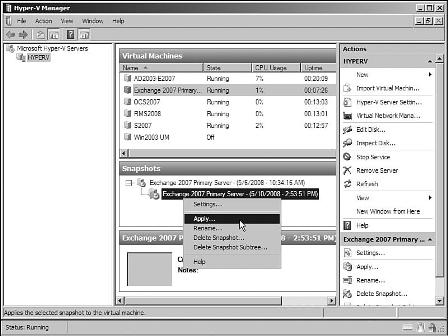