Server Management (vSM) 2008 R2 from Visionapp is a server build management and automation solution designed for the building, maintaining and automating of server images.

vSM 2008 R2 minimizes the time and effort required for complete server rebuilds by automating those rebuilds that are pushed out to Citrix farms. Through this automation, farms can be quickly completed in a matter of days (rather than weeks). Visionapp designed it to ensure stability by creating reproducible installations of servers and clients for all deployment technologies.

With vSM 2008 R2, administrators can enforce best practices by rolling back servers to the last known good state and following change management recommendations from ITIL. Admins can also optimize Microsoft and Citrix environments by managing multiple master images and scheduling their use in Citrix Provisioning Server, automatically installing printers and checking for inconsistencies.

Other tasks supported by vSM 2008 R2 include: 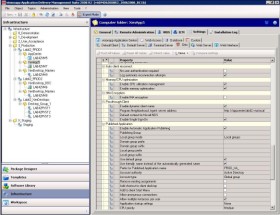 Pricing: Starts at $24.99 per managed node (server or desktop), plus $49.99 per Citrix concurrent user. Service-based pricing is also available.