The Exchange Deployment Tools are an invaluable asset to any deployment team. They are straightforward and robust, and they cover a multitude of migration scenarios.

Even die-hard Exchange upgrade enthusiasts with years of Exchange 2000 migration experience under their belt can benefit from the tactical advice and safeguards built into the tools.

These prerequisite steps should be followed exactly as described in the tool. In fact, the entire migration process outlined in this chapter can be followed via the Exchange Deployment Tools. In addition to running through the prerequisite steps listed in the tools, several key factors must be taken into account before deploying Exchange Server 2003. 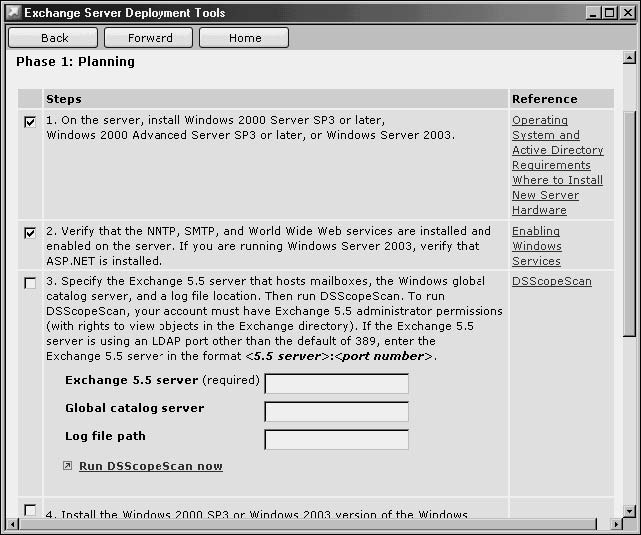 The second piece of the one-to-one environment that must be one-to-one is the number of mailboxes per Active Directory account. In Exchange 5.5, a Windows NT account could have an unlimited number of mailboxes associated with it. In Active Directory, the messaging components of the user account are just additional attributes of the user, so the mailbox is really part of the user account. It was quite common for Exchange 5.5 administrators to use a single account for multiple mailboxes, especially for administrative functions such as backup and virus-scanning products, and also for resources such as conference rooms. Linking the Active Directory accounts to the Exchange 5.5 mailboxes can be done either manually for a few mailboxes or for a large number of mailboxes by using the NTDSNoMatch utility, or by using the Resource Mailbox Wizard in the ADC Tools, described in more detail later in this chapter.

The more items that exist in Exchange 5.5, the more items must be migrated to Exchange Server 2003. It's a given that mail database and public folder servers need to be migrated, but all the connector servers might not be necessary in the Exchange Server 2003 environment. Now is the time to rethink the Exchange design. By consolidating servers and using features such as clustering, it is now possible to locate all the Exchange installations at a few central hubs on the WAN where the administrators with the best Exchange skills reside. In addition, the enhanced remote client access capabilities introduced in Exchange Server 2003 allow for site consolidation, further reducing the number of servers that must be supported. Of course, the migrated Exchange Server 2003 environment can mirror the exact same configuration as Exchange v5.5. It's just an option (and opportunity) to rethink the best configuration for the organization.

If the organization is planning to consolidate services before migrating to Exchange Server 2003, it makes sense to postpone the Service Pack 3 upgrade until the consolidation through the Move Server Wizard is completed.

Tip 3: Structuring an Exchange migration for the best results

This chapter excerpt from Microsoft Exchange Server 2003 Unleashed, by Rand Morimoto, is printed with permission from Pearson Education, Copyright 2005. Click here for the chapter download or purchase the book here.