By
Two methods exist for moving mailboxes to Exchange Server 2003, and each differs in hardware requirements and the amount of risk and interoperability during and after the migration. The following migration methods for mailboxes are covered in this section:

Moving user mailboxes between servers is the safest migration method because the servers' databases are not in jeopardy if the migration fails. Moving the users also provides the opportunity to use new hardware with little or no downtime. In addition, moving users allows the organization to migrate users in sizeable chunks over time. Outlook profiles automatically are updated on the desktop, and users are redirected to the new Exchange Server 2003 systems when they log on. The limitation of moving users to a new server is that they can be moved only to an Exchange Server 2003 system in the same Administrative Group. Moving users can also slow the speed of the migration, which can be seen as a positive or negative, depending on the organization's goals.

To move user mailboxes, open the Active Directory Users and Computers administrative tool and right-click the user to move; then select Exchange Tasks, as illustrated in Figure 15.8. 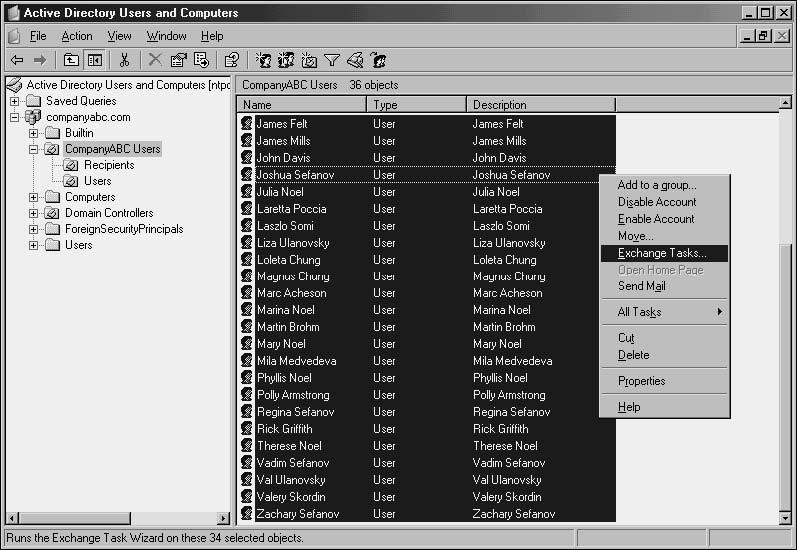 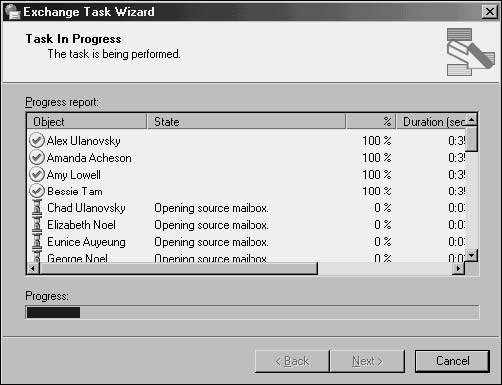 Connections are then made to the source and destination server, and the mailbox contents are moved four at a time, as illustrated in Figure 15.9. If the move is unsuccessful, the user's mailbox still is available on the source Exchange 5.5 server.

If server hardware or budget is a limiting factor in the project, the organization might want to consider using a leapfrog method (also called the swing upgrade method) to migrate the users to Exchange Server 2003. Using the leapfrog method, fewer servers need to be purchased to perform the migration through the move users method.

This greatly reduces the speed of the migration process and also requires a Native Mode Windows Server 2003 domain to support the public folders if they are scattered across the Exchange 5.5 servers. Another option for public folders in this scenario is to consolidate the public folders by replicating all the folders to a single Exchange 5.5 server in the site if a Native Mode Windows Server 2003 domain is not available. Connectors could also pose a problem with this method and require a solution before starting the leapfrog process.

A few issues should be considered when using ExMerge to move mailbox contents to a new organization. The biggest one is that the capability to reply to all recipients on old messages could be lost. At a minimum, end-users need to force the names on old messages to be resolved against the new directory by using Alt+K or the Check Name button on the toolbar. End-users might be confused and frustrated if the new system cannot locate all of the users. This can occur if all users have not been migrated from the old organization or if mail connectivity to foreign mail systems has not been re-established in the new Exchange organization. To avoid these problems, every migrated mailbox must have the X.500 address of the old organization added to it, either manually or via a third-party tool.

The second-biggest issue is that appointments on the user's calendar that contain other attendees are severed. The original appointments were resolved to the attendee's old addresses when they were created. This means that if the user deletes the appointment or makes a change to the time or location of the meeting, the other attendees will not be notified.

Even with these issues, ExMerge can be just the thing organizations are looking for, especially when they have survived multiple mergers and acquisitions and are looking to start over with Exchange Server 2003. If the organization plans to use ExMerge for the entire migration process, spend extensive time prototyping the merge process to catch other issues the organization might encounter.

ExMerge does not support the following:

ExMerge also supports advanced options such as extracting folder permissions. It can filter the messages for extraction from the source store by attachment name or subject that are accessible under the Options button on the source server selection screen.

When using ExMerge to move mailbox data from different organizations and sites, administrators need to be aware that ExMerge cannot create a mailbox on a destination server or set alternative recipient and forwarding rules on the source server. Another item that administrators should be aware of is that ExMerge runs only on Windows Server 2003. ExMerge needs to be able to access several Exchange Server 2003 DLL files. To run ExMerge, copy the Exmerge.exe and Exmerge.ini files to the Exchange \bin directory, or update the system path to include the Exchange \bin directory if ExMerge will run from another file location.

Tip 3: Structuring an Exchange migration for the best results

This chapter excerpt from Microsoft Exchange Server 2003 Unleashed, by Rand Morimoto, is printed with permission from Pearson Education, Copyright 2005. Click here for the chapter download or purchase the book here.