With the rapid evolution of the smartphone industry, IT administrators find themselves pulled in a few different directions -- ensuring compliance and security while staying flexible enough to support a diverse number of devices. Because it’s extremely difficult to physically secure and audit mobile devices, many administrators defer to BlackBerry devices, which provide granular security, compliance control and auditing capabilities through BlackBerry Enterprise Server (BES).

A defining characteristic of the BlackBerry security model is the user/device pairing. The relationship of the BlackBerry device to a BlackBerry-enabled user is 1:1, meaning that a user can only synchronize with one device at a time. While this may not be optimal for all users, it has benefits that go beyond administrative.

Users can configure BES 5.0.2 to translate their BlackBerry PIN to their network credentials. BES can then impersonate the user, allowing them access to Web-based apps, RIM apps and line-of-business applications without having to continually enter their credentials.

Environments with high-availability requirements benefit from BES’s built-in standby server configuration with a proprietary failover mechanism. There are no additional licensing costs for the standby server. BES also has a number of additional components that can be installed to its core component -- the BlackBerry Router -- that increase its value as an enterprise messaging product. Table 1 lists BES 5.x components.

Comparing on-premises BES editions
BlackBerry Enterprise Server Express, which has been available as a free download since March 2010, allows companies with up to 2,000 users leverage BES’s enterprise-class security and management features. But it does have some limitations (Table 2).

BES Express does not support certain premium features available in the full version, such as Enterprise Instant Messaging, Enterprise Social Networking Solutions, Chalk Pushcast Software and BlackBerry Mobile Voice. Possibly the most compelling reason to deploy the full version of BES is its diverse security settings, which are available through more than 450 IT policies. From a scalability standpoint, environments with more than 2,000 BlackBerry users will be able to support them on a single full version BES. Still, BES Express marks the first free version of the server.

Prerequisites for running BES 5.0.2
There are a number of preliminary steps you must take before installing BES in an Exchange Server 2010 environment. The best step you can take to eliminate deployment problems is to review RIM’s online compatibility guide. Under the BlackBerry Enterprise Server for Microsoft Exchange Compatibility Matrix, you’ll find a list of components, including:

Although BES 5.0.2 supports Exchange Server 2010, you could encounter some issues connecting users. BlackBerry KB24470 details a workaround. There is also a known functional limitation with the Remote Search capability on handhelds.

You’ll need to download and install CDO 1.2.1 on your BES server prior to installation. The current version available for download from Microsoft is 6.5.8190.0. While this version is listed on the compatibility matrix, it is identified as recommended -- not supported. The 6.5.8190.0 version of CDO 1.2.1, however, is needed to support Exchange 2010 SP1.

If your environment doesn’t exactly match the recommended configuration, you’re not necessarily out of luck. Thoroughly review the compatibility matrix so you understand what incompatibilities and limitations to expect.

Configuring prerequisites
Once you have confirmed that your environment will support BES 5.0.2, you’ll need to complete the following tasks:

If your Exchange 2010 organization does not have any public folder databases, follow these steps to configure BES to run without public folders using Regedit:

If Exchange 2010 SP1 servers don’t have public folder databases, perform the workaround outlined in the BlackBerry KB24470. This fix requires that you edit the registry on the BES server to ignore that fact that public folders are missing when connecting to Exchange 2010 SP1, as shown in Figure 3.You need to set the CONNECT_IGNORE_NO_PF flag. 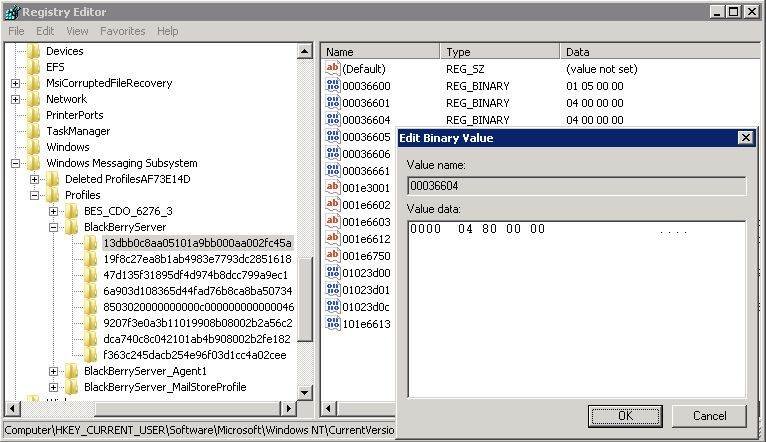 Enabling audio attachments
Add the blackberry.net domain to the Allow Lists in your antivirus and antispam applications so that Exchange won’t filter wireless activation messages. Then enable Desktop Experience on BES so that it supports audio attachments. To do this, open Windows PowerShell, select Import-Module ServerManager and then choose Add-WindowsFeature Desktop-Experience-Restart.

The Desktop Experience feature will load a number of components found on the Windows 7 desktop that are not installed by default on Windows Server 2008 or Windows Server 2008 R2. The specific feature needed to support audio attachments is Media Player. You’ll need to restart the server to allow Windows to install all of the Desktop Experience components; this will take several minutes and two additional automatic restarts to complete.

Now that you’ve learned about differences between BES and BES Express and have prepared to deploy it in your Exchange 2010 SP1 environment, follow the steps to install and verify BES 5.0.2.

ABOUT THE AUTHOR:
Richard Luckett is president of SYSTMS of NY, Inc., a Microsoft Gold Partner providing professional services, managed services and training solutions. He is an MCSE, MCITP and MCTS with security and messaging specializations, and an MCT with nine years of Exchange training experience. Richard is an Exchange MVP award recipient, co-author of Administering Exchange 2000 Server and Exchange Server 2007: The Complete Reference, course director and author of seven Microsoft Exchange courses, and resident email security expert for SearchExchange.com Contact him at [email protected].