Back in the old DOS days, one of the utilities I carried with me in my little box of floppy disks was a program named touch. When you ran it with a filename or wildcard passed as a parameter, it would update that file's time/date stamp to either the current time or a specific time/date specified by you. It was very handy, especially if you wanted -- or needed, because of buggy software -- to have file dates consistently set.

From time to time I've come across other programs -- both command line interface (CLI) and GUI alike --that do the same things with varying additional features. It wasn't until recently, though, that I came across a version from a programmer with a reputation for good things: utility writer Nir Sofer's recently-released tool BulkFileChanger. (Editor's note: Read Serdar's take on other NirSoft tools, such as NTFSLinksView and BlueScreenView.)

The title of BulkFileChanger should speak for itself; it lets you take any number of files -- dragged-and-dropped from Windows Explorer or selected with a wildcard -- and apply a set of attribute changes to them. These changes include altering the created/modified/accessed timestamp and the read-only/hidden/system/archive flags (also known as the R/H/S/A flags). You can also see the existing attributes for the files in question in a convenient grid display.

Note: If you drop a folder, the contents of the folder are added to the list. You cannot directly manipulate folder attributes with this program.

When modifying timestamps, you can either apply an arbitrary time or simply adjust the time in either direction by a specified number of units: seconds, minutes, hours, days, months or years. Another option lets you specify all dates as Greenwich Mean Time, which is useful if you're working with, for instance, a server whose clock is set to GMT. You can also elect to switch the value of the R/H/S/A flags to the opposite of whatever they currently are, a handy trick if you simply want to invert whatever their current settings are without having to tag-and-flag them manually.

BulkFileChanger includes other useful features as well. For example, when you press F3 to add files by wildcard, you can choose a directory and specify how many subdirectories under that to recurse (if any). Press F7 when files are selected in the main window and you can execute any command-line program and pass the selected files as a parameter. Select more than one file and the program in question is run multiple times with each selected file passed once. Note that when you do this, all instances of the program are launched in parallel, so be warned if you're running something that's exceptionally CPU- or I/O-intensive. It would be nice, however, if there was an option to specify that the programs launch serially, not in parallel.

One kind of transformation that is not done on files using BulkFileChanger is renaming. As far as I can tell, NirSoft does not have a bulk-renaming tool in its arsenal yet, but I'd bet this week's beer money that BulkFileChanger is going to receive that feature in some future version. 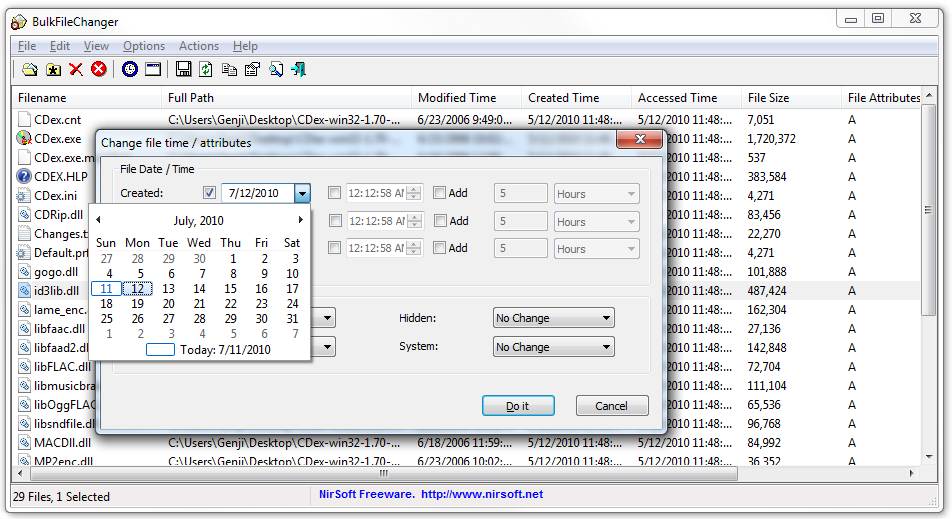