One of the nice things about SharePoint document libraries is that they allow you to retain multiple versions of documents so that you can go back and review how a document has been modified over time.

The process of controlling versions is relatively simple once it's set up in MOSS 2007.

Document version history is controlled through SharePoint's Document Library Versioning Settings page. You can access the page by going to your SharePoint site's default page. 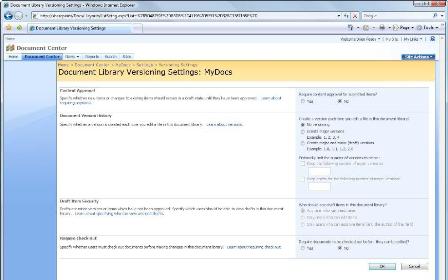 The first part of the Document Library Versioning Settings page is the Content Approval section. This section asks you if documents should remain in draft form until they have been approved. SharePoint allows you to configure workflows through which documents can receive any number of approvals prior to being posted in a document library.

If you require approval for submitted items, then any new or modified items remain in draft form until the approval process is complete. This usually means that the document is treated as a minor version until it has been approved.

The Document Version History section allows you to control how versioning is implemented and how many versions are retained from each document. Versioning is not enabled by default, but you have the option of creating a new major version of a document each time it is edited. Or you can create major and minor versions of the document throughout the editing process. Creating a new major version is theMOSS 2007 equivalent to the versioning option implemented in SharePoint 2003.

Just beneath the options to enable versioning are options that allow you to specify how many major versions of a document you want to retain and how many drafts you want to keep for each major document version.

Although it might be tempting to shoot for the moon and use really high numbers, keep in mind when deciding how many versions of a document to retain that the documents are stored within a SQL Server database. Any time you create a new version of a document, an entirely new copy of the document is stored in the database. In other words, SharePoint does not just store the deltas from one version to the next. You'll consume a lot of disk space in a hurry if you get carried away with the number of document versions you retain.

MOSS 2007 can also define drafts as either minor versions of documents or documents that are awaiting approval. The Draft Item Security section allows you to decide who can view draft documents. The default setting makes drafts visible to anyone with permission to read them. You do, however, have the option of making drafts visible only to those who have permission to edit them. If a document requires approval, you have the option of making the document draft visible only to the person who created it and to people who have the authority to approve the document.

The last decision on the Document Library Versioning Settings screen is the Require Check Out option. As the name implies, this option simply asks you if you want to require users to check out a document before they are allowed to edit it. Requiring a document to be checked out prevents two different users from making contradictory modifications to a document at the same time.

Versioning has come a long way since SharePoint 2003. Although the new versioning settings inMOSS 2007 add to SharePoint's complexity, it is really nice to be able to distinguish between major and minor document revisions.