While most Windows developers know of Event Tracing for Windows (ETW) as a logging and tracing mechanism, many...

administrators have never heard of it. Simply put, ETW includes event logging and tracing capabilities provided by the operating system. Implemented in the kernel, it traces events in user mode applications, the operating system kernel and kernel-mode device drivers.

Event Tracing for Windows is used by a number of core OS components and some third-party applications to provide event logging and tracing. Although it required access to a checked build of Windows to gather ETW information when first released with Windows 2000, more recent versions provide built-in tools with normal (free) Windows builds.

Getting started with Event Tracing for Windows
When diagnosing and troubleshooting Windows Server issues, it seems there is never too much data. The admin is always looking for additional details on what is going on with various components to pinpoint the problem. As such, there are a number of tools like Process Monitor, Process Explorer, Performance Monitor (Perfmon) and Performance Analysis for Logs (PAL) that dig considerably deeper than the event log, but there are times when we need to dig even further down than that.

ETW allows additional instrumentation for gathering data that would not otherwise be available and has a number of advantages. For example:

Event Tracing for Windows may seem like a great tool, but using it is another issue since there is no GUI or user guide. It also requires a few preliminary steps just to produce output that can be used for analysis.

In order to provide useful output you need a consumer. The consumer built in to Windows Server is Tracerpt.exe. As you can imagine, there are a number of flags for Tracerpt to provide specific output formats, so it’s important to become familiar with the Tracerpt and Logman utilities that are native in Windows Server 2003 and up, as well as Windows 7 and Vista.

It’s also important to understand the architecture for ETW. As you can see in Figure 1, the controllers are used to start and stop a tracing session. The tool used to do this in Windows Server 2003 and 2008 is Logman.exe. 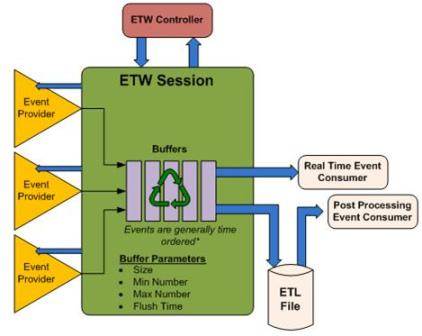 For instance, specifying Active Directory: Kerberos as a provider will only return Kerberos-specific events.

Event providers differ between Windows versions, however. For example, Windows Server 2003 has 22 providers, while Windows 2008 has 387. This gives more power to the trace and offers more granularities. Yet when it comes to LDAP traffic, the Active Directory: Core provider appears to give the same detail for either Windows version.

The –pf option reads an input text file (input.txt in this case). The format of the input file is shown in Figure 2.

Putting Event Tracing for Windows to work
The best way to explain ETW is with a case study. Recently, I was contacted by an engineer who needed information about how Active Directory was responding to an LDAP request for a Unix client authenticating against an AD domain controller. He used a Unix command to see the bind request/response on the Unix side and wanted to see similar output on the Windows side. The output looked something like this:

To work through the output, I used the NTDS Diagnostics registry key at HKEY_LOCAL_MACHINE\SYSTEM\CurrentControlSet\Services\NTDS\Diagnostics and defined the LDAP Interface for a value of 5. It only provided the elapsed time of the operation and wasn’t close to the Unix output, so I decided to try Event Tracing for Windows. Since this was on Windows Server 2003, I used the Active Directory: Core provider, which gave LDAP details.

Below are the steps and commands I used to create an ETW trace and generate a log. The commands were used to dump LDAP data during authentication for the Unix engineer. I also created a C:\ETW directory to store all my data.

Since the .etl log is unreadable we can use Tracerpt to give us some useful data. The command for this example would be: 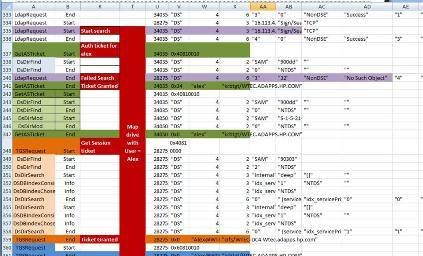 The exciting thing about Event Tracing for Windows is that the opportunities with providers seem endless. Providers for Group Policy, Kerberos, LDAP clients, Netlogon, FSRM, IIS and many more are all available in Windows Server 2008.

While I used to rely exclusively on event logs and similar log files, I can now go a level deeper with Event Tracing for Windows and get a lot more verbose data to help me solve whatever problem I’m troubleshooting. The commands to produce the traces and reports are very easy to use as well. Of course, you can find more command options and details online.