Most file servers are equipped with huge hard disks or disk arrays. Still, these servers have a finite storage capacity that must be shared by many users, while some of it is reserved for the organization's future needs.

Disk quotas ensure that server disk resources are divided equitably and that the server will not run out of disk space due to a careless user. However, disk quotas can be quirky; applying a quota doesn't always have the anticipated effect. Before discussing why this is, let's go over the process for creating disk quotas.

Disk quotas are managed on a per-volume basis. To set a quota on a volume:

The Quota tab allows you to set a default quota for the volume that applies to any new users created. You'll be able to set a disk space limit and a warning level. If you wanted to limit users to using 100 MB of disk space, you could set the warning level to 80 MB, so the users will know when they're getting close to their limit. 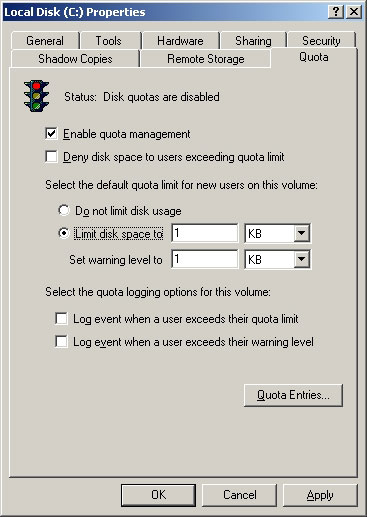 Note: At the bottom of the screen shot there's a check box you can use to deny disk space to users who have exceeded their quota. Use it with caution; it can prevent users from being able to save their work if they're too close to their limit. Disk quotas: Not too high, not too low

I once did a consulting project for a company that had implemented quotas on user workstations rather than just on servers. There's usually no reason to put quotas on workstation hard drives, because users should be saving data to network servers, not to local hard drives. But this company did it anyway. Windows writes files to the C: drive as part of the boot and logon processes. Whoever had implemented the quotas had set them too low, so some users were unable to log into their workstations as a result.

The Quota tab is simple. But some beginning administrators miss the fact that these quotas apply only to new users. You have to establish separate quotas for existing users, which you can do by clicking the Quota Entries button.

Windows will now display a list of the existing quota entries. To add a new quota entry, click the New Quota Entry icon. You'll be prompted to enter the name of the user you want to apply the quotas to. Unfortunately, you cannot apply quotas to a group, but you can select multiple users simultaneously. After selecting a user, you'll see a screen that has the same basic options as the screen shown above. You'll then use this screen to set the quotas for the individual user.

The reason for this is that users typically think of quotas in terms of space occupied by files they have stored on the volume. Technically, however, a quota takes into consideration any file that a user owns. For example, if a user created a file and then gave it to another user, the user might still be the file's owner (depending on the individual circumstances), and the file would therefore be counted against the user's quota.

Compressed files can also lead to confusion. When determining how much disk space a user has consumed, Windows looks at the original size of a compressed file, not at the actual amount of space the file is consuming on the hard disk in its compressed form.

Some situations can cause a user to receive more disk space than what their quota allows. Disk quotas are based on file ownership. Typically, a file's owner is the user who created the file (unless someone else takes ownership later on). The problem with this is that Windows Server 2003 supports the use of three file systems: FAT, FAT-32 and NTFS. Of these, NTFS is the only one that acknowledges the concept of file ownership (or of quotas for that matter).

Now, imagine that a server contains a FAT-32 partition filled with user data. The volume of data is starting to get out of hand, so the admin decides to implement disk quotas. But before disk quotas can be employed, the file system must be converted to NTFS. Since FAT-32 does not record a file's owner, Windows sets each file's owner attribute to Administrator during the file system conversion process. This means that none of the files that existed prior to the conversion will count toward users' disk quotas unless the ownership information is reset.