In guest OS virtualization, the host basically partitions its resources into several independent machines that can support different operating systems and applications concurrently. A virtual machine is a self-contained operating environment that runs on top of the virtualization layer and behaves as if it is a separate computer.

The reason guest OS virtualization is so powerful is that it 'liberates' the OS from the hardware it runs on. After all, a virtual machine is nothing more than a set of files in a folder, as shown in the depiction of the directory below. 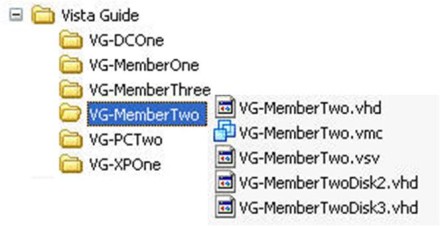 These files mostly include configuration, virtual hard drive and memory files, as shown in the table below.


Once a guest OS is 'liberated', you can do all sorts of things. For example, you can move it from one host server to another. In addition, you can easily protect a virtualized guest OS—just use a replication engine to copy the files from one host to another, even in another site. The possibilities are endless.

There are several types of guest OS virtualization tools. The most common is a virtualization engine that sits atop an existing OS. For example, you install Windows Server 2003 on the host, then install either Microsoft Virtual Server or VMware Server, and now you can create and run virtualized operating systems.

Hypervisors are actually small pieces of code that run between 180 KB to 500 KB. Because of their small size, they are non-obtrusive.

Software vendors are even building custom features into their server operating systems to make them behave better as guest OSes. For example, Microsoft has added features to Windows Server in Service Pack 2 to make it interact with the host in a better manner.

But what makes guest OS virtualization even more popular are some changes in licensing made recently by vendors. For example, Microsoft has changed its server OS license model. In the old license model, you needed to buy one Windows license for any instance of an OS, either physical or virtual.

But now, with Windows Server 2003 R2 Enterprise Edition (WS03 R2 EE), each license you buy lets you install it on the host as well as create and run four virtual machines. So you buy one license for your physical OS and you can add four free guests of any version of Windows. If you want more than four virtualized OSes, buy another license of WS03 R2 EE to get four more free virtualized OSes.

In addition, Microsoft has removed the OEM restriction from the R2 Datacenter Edition. If you buy Datacenter, you can run an unlimited number of virtualized instances of Windows. And here's the cherry on top of the sundae: It doesn't matter which virtualization platform you use.

The beauty of this model is that it supports faster virtual machine provisioning because you don't have to worry about licensing. Think about it. You get an automatic 75 percent discount on WS03 licenses when you install it in a virtual instance instead of on a physical host. This makes server consolidation through OS virtualization a no-brainer.

Microsoft has also made some changes in the way it licenses its other server technology. The easiest way to calculate how many licenses you need is to use one of the two free Windows Server Virtualization calculators that Microsoft now provides.

The first calculator lets you configure your server based on virtualization technology, sockets and clustering requirements, as you build the virtual machines. 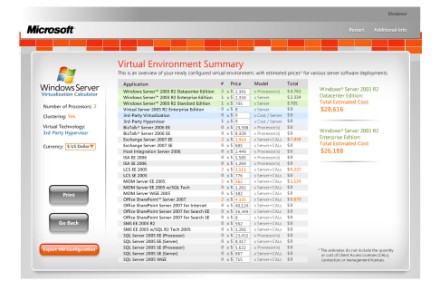 The second calculator lets you estimate the number and cost of licenses according to Windows Server edition. It offers you two options.

Microsoft is not alone in making licensing changes, though some manufacturers have yet to approve of the virtualization model and reflect it in their licensing schemes. Make sure you talk to your software provider before you decide to virtualize an instance of a server product.

Continue to How to use app virtualization for server consolidation