A while back I wrote about a little tool called SIW, a system-information utility that dumps every conceivable piece of data about a PC -- software and hardware. Tools like this always catch my eye, so I'm constantly on the lookout for others. This week my vigilance was rewarded; meet HWiNFO.

According to its creator, Slovakian programmer Martin Malík, HWiNFO (short for "hardware info") is a collection of professional hardware information and diagnostic tools supporting the latest components, industry technologies and standards. HWiNFO has been updated continuously for over 10 years and its most recent build (version 3.51) was released on May 25, 2010, with a beta of version 3.52 already available. The program is proprietary freeware, meaning it can be used without charge but with no warranty.

HWiNFO comes in two incarnations; a DOS version and a 32/64-bit Windows version (HWiNFO32). The former runs from any DOS environment (e.g. FreeDOS) while the latter runs on just about any 32- or 64-bit edition of Windows. It also offers many more reporting and utility options.

I tested the Windows version on several different machines, including a 64-bit Windows 7 installation, and it worked fine on all of them. The Windows version comes packaged either with an installer or as a simple zip file. It doesn't need to be formally installed to run properly; you can unpack the zip file to any folder (like on a removable drive) and run it from there.

When the program runs, it initializes a number of hardware-sensor drivers for the sake of low-level information gathering. These drivers can be installed and left resident in the system you're examining, but this isn't required. You can also elect to modify the program's default options before it begins probing hardware. By default, most of the features that can cause system instability are turned off, so the defaults generally work fine. Be warned, however, that if you're running any programs in the background while HWiNFO probes your system, they may stutter or stall entirely for seconds at a time while the detection routines run.

When the program is finished detecting everything, three windows pop up:

All of the information you see is updated in real time, and the various panes can be minimized to the system tray and recalled later. Reports can be created from the information gathered and exported in a whole bevy of formats, including text, comma-delimited, XML, HTML, MHTML, and so on. A full SDK is also available, at a cost.

One very slick additional feature is a Windows desktop gadget (for Vista and up) that lets you display the output from any available sensor. Right-click on the sensor listing in the program window and select Add to Sidebar to have that sensor's data show up in the gadget as long as the program continues running.

On the downside, the program doesn't have command-line capacity, so you can't launch it from a script and generate reports automatically (SIW has many of these). That by itself is a major drawback, but it's partly compensated for by the sheer breadth of hardware it covers.

Figure 1. An example of HWiNFO's system summary and sensors displays (click to enlarge) 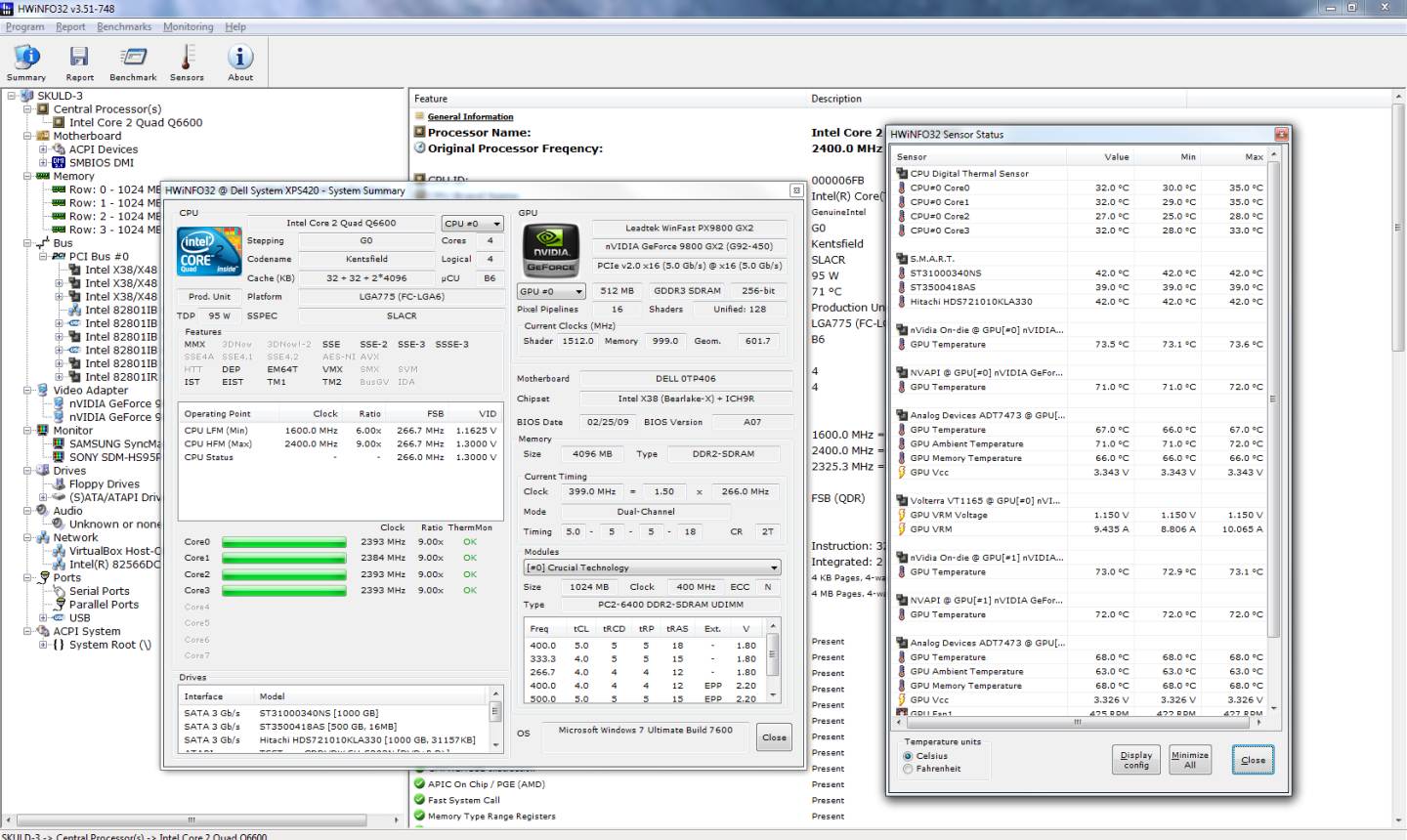