segment their global address list for users. Let's see where address book policies make sense and the steps necessary to effectively implement them.

Past versions of Exchange Server included a feature known as GAL segregation. GAL segregation is implemented by setting custom permissions against Active Directory and allows administrators to segment their global address list. Doing so gives different groups of users specified views of other users in the organization. Although well-documented, configuring GAL segregation was not an easy process.

Included in the Exchange 2010 SP2 release -- and in Exchange 2013 -- address book policies offer that same functionality, though things have been simplified.

Where to use address book policies

Address book policies (ABPs) are relatively easy to implement, but aren't appropriate for all organizations. Let's see where they make sense. 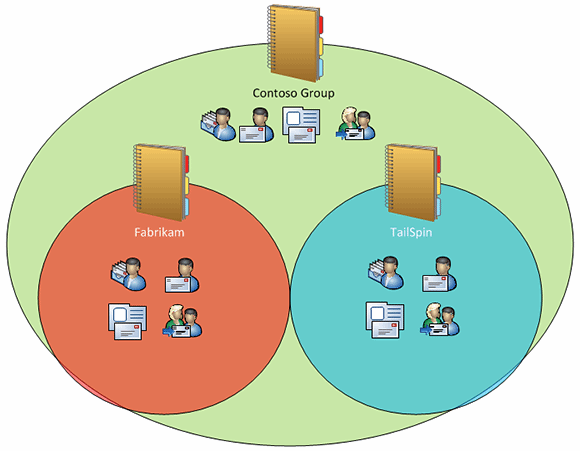 Figure 1: A company with multiple divisions is a terrific candidate for Exchange address book policies.

Companies with multiple divisions
If your organization has multiple divisions that operate independently, one division may have no reason to deal with another on a day-to-day basis. Having one massive global address list (GAL) only serves to confuse end users. Administrators in these companies should consider address book policies for each division, with the corporate group maintaining full visibility over the entire company (Figure 1)

Colleges, universities and school districts
While educational institutions often have tens of thousands of mailboxes, it's common that they have multiple sections that operate independently.

The administrative departments may only need to contact general staff and might have trouble identifying staff mixed in with students. It makes sense here to have a GAL that is only comprised of staff. 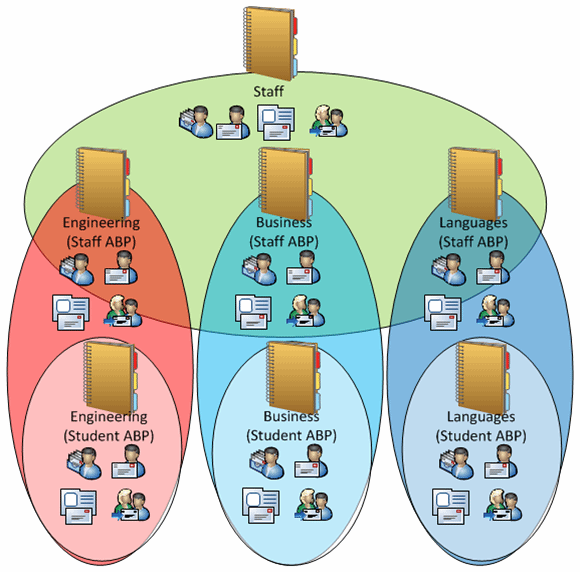 It's possible to set up a number of address book policies where no single user has a view of everyone, yet staff members are present within multiple GALs (Figure 2).

In a hosted configuration, an end user likely isn't aware that he is one of many sharing a common Exchange environment. Therefore, it's unlikely that the end user would be present within multiple GALs. The one ABP per company model is often used in these types of situations (Figure 3).

After determining why you want to use ABPs, you must define your requirements. Let's look at a company with multiple divisions as an example:

The company divisions will be split up so that:

Contoso Holdings and the two separate divisions are contained within their own organizational units within Active Directory. This makes it simple to find users within each respective division.

For each GAL, let's use Exchange's CustomAttribute1 to filter users and determine who should be listed in each GAL. We'll use CustomAttribute1 to store the division name, then create two address book policies for each division. This leaves the corporate Contoso users as they are, with visibility over the existing default global address policy.

The core of this process is accomplished via PowerShell, though we can view the results of our actions later in the Exchange Management Console (EMC).

First, let's set our CustomAttribute on Tailspin and Fabrikam users to give us the key attribute to filter on:

Next, let's create the new GALs for each division, referencing the CustomAttribute and its value:

Next, we must create the base address lists. These are the standard "Folders" within the GAL that end users use to view lists of mailboxes, distribution groups, contacts and room mailboxes:

We must now round up the components of the new GALs and create two new OABs:

Now that we have our GALs, address lists and OABs, we can create two new address book policies:

The complete and working address book policies are now ready. They are displayed in the EMC, along with everything else we've created (Figure 4).

Although we -- the admins -- can see the policies, end users can't. In other words, even though users are listed on the GAL that's contained within an ABP, it doesn't mean it's the one they see. To enable users to see the correct GAL, as well as its respective components, we must assign each user to the correct ABP.

To do so, use the CustomAttribute filter we used earlier to search for mailboxes using the Get-Mailbox cmdlet and pipe the results to the Set-Mailbox cmdlet. Doing so assigns the ABP: 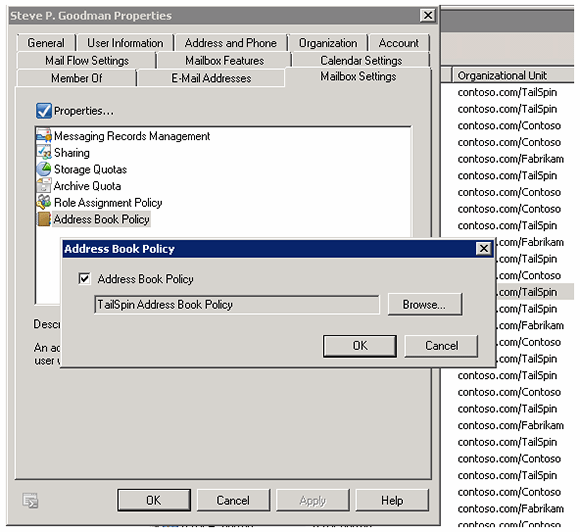 Figure 5: Assign an Exchange address book policy to a mailbox.

You don't necessarily need to accomplish this task using the Exchange Management Shell (EMS), though it's certainly easier for multiple users. You can also use the EMC and assign an address book policy when editing an individual mailbox (Figure 5). 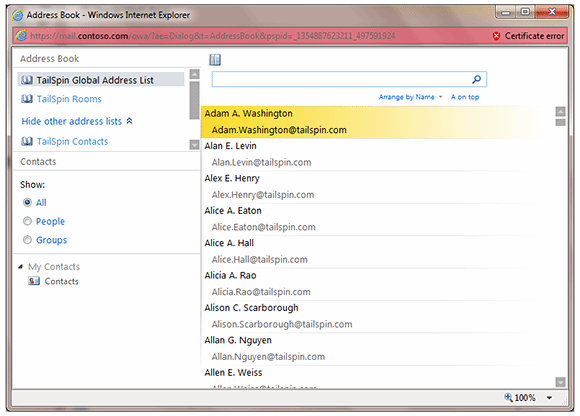 Figure 6: A screenshot of a user's new GAL.

We have now successfully implemented address book policies. When a user views their GAL, he will only see the view of the organization based on his division (Figure 6).

The final aspect to understand is what to do with new users. After creating a new user and mailbox within a division, you must accomplish two additional tasks:

Because we previously used CustomAttribute1 -- a property that's viewable and easy to edit via the EMC -- the two tasks are easily accomplished there after creating the mailbox.

That said, you can also accomplish the task using the EMS:

Address book policies might initially sound daunting, but as you can see, armed with the right steps they're actually quite easy to configure. Use the techniques described in this tip and you'll find that implementing and managing address book policies within your Exchange organization is something that is both easy to achieve and requires minimal future management.

About the author:
Steve Goodman is an Exchange MVP, and works as a technical architect for one of the UK's leading Microsoft Gold partners, Phoenix IT Group. Goodman has worked in the IT industry for 14 years and has worked extensively with Microsoft Exchange since version 5.5.