In a bid to compete against VMware, Microsoft recently released Windows Server 2008 Hyper-V, its flagship virtualization engine or hypervisor. Still, as a version 1 product, many in the industry have claimed that Hyper-V is lacking in comparison to VMware in certain key areas:

Hyper-V does not offer any such features, as memory that is allocated to a VM is dedicated to that VM from that point on.

So just what does Microsoft Hyper-V offer? While Hyper-V is not another VMware ESX Server (at least not yet), it is still a very powerful hypervisor that is built on top of the Windows Server 2008 code. This means you can install and run Hyper-V on a multitude of devices and server configurations -- many more in fact than you can choose for VMware. Hyper-V also has support for mixed virtual machine environments, letting you run different types of 32- or 64-bit operating systems simultaneously (Windows and Linux).

Host servers running Hyper-V can include up to 16 processor cores and support for virtual machines running on up to four processor cores, depending on the guest operating system. Hyper-V includes a new virtual switch that provides extensive emulation of network interface cards. Through this switch, you can configure VMs to run Windows network load balancing or failover clustering, which lets you create highly available virtual machine configurations.

Hyper-V has a new hardware-sharing architecture that provides access and utilization of core resources (disk, networking and video) using a virtual service provider/virtual service client (VSP/VSC) architecture (see Figure 1). This means that virtual machines in Hyper-V do not rely on Hyper-V for the drivers for virtual hardware. Instead, virtual machines run their own drivers directly through Hyper-V integration components. This removes a potential single point of failure in host server configurations. 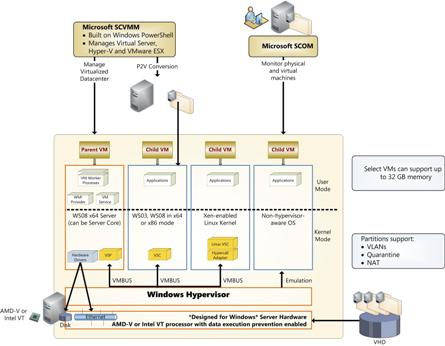 While Hyper-V does not support live migration, it does support quick migration, which can migrate a running VM from one system to another with minimal downtime through Windows Server and System Center management tools. Basically, the VM is paused on one server and restarted on another. Hyper-V can also create virtual machine snapshots, which act as point in time captures that let you restore a VM to a previous state. It can take up to 512 snapshots for each VM without service interruption.

Hyper-V systems are scalable, letting you run several VMs within a given host. Hyper-V hosts run exclusively on x64, taking advantage of the additional memory capabilities inherent in this platform. In addition, Hyper-V is extensible through Windows Management Instrumentation (WMI) or its application programming interface (API), which can allow independent software vendors to build custom tools or utilities that extend the capabilities of Hyper-V.

Microsoft's virtualization engine can be installed on either the full or Server Core installation of Windows Server 2008, but Server Core is highly recommended since it requires fewer resources and would therefore take less away from the VMs it hosts. In addition, because it is an integral part of Windows, Hyper-V is an appealing hypervisor if only for the familiar ground it puts IT professionals on.

Yes, it's true: This first iteration is not as powerful as other hypervisors, but that will not significantly influence Hyper-V's adoption. It is a true hypervisor that is built on one of the most powerful server operating systems of all time. Watch it grow and look for substantially improved feature sets in future iterations.

Can Microsoft really make an impact with Hyper-V?

What does it have to offer?

How does Hyper-V rate?

Can it meet high availability requirements?

How does it fit in the dynamic data center?


ABOUT THE AUTHORS
Danielle Ruest and Nelson Ruest are IT professionals specializing in systems administration, migration planning, software management and architecture design. Danielle is Microsoft MVP in Virtualization and Nelson is Microsoft MVP in Windows Server. They are authors of multiple books, including the free Definitive Guide to Vista Migration for Realtime Publishers and Windows Server 2008: The Complete Reference for McGraw-Hill Osborne. For more tips, write to them at info@reso-net.com.