If your current edition of Windows Server doesn't include  SMTP/ POP3 mail, and you don't want to upgrade to another version of Windows Server, go through the hassle and cost of adding Microsoft Exchange or outsource your email, you may want to consider Mercury/32 mail server.

Created by David Harris, who is author of the Pegasus Mail email client, Mercury/32 provides basic SMTP and POP3 mail services on any 32-bit Windows system (a Server edition of Windows is not required). The program is free for non-commercial users, while commercial users can buy a license for the program. In addition, purchased versions can make use of a native Windows service version of the program, while the free version is a conventional GUI client app. 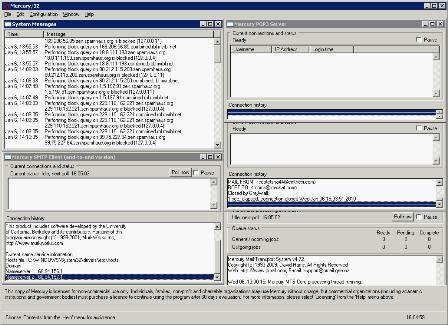 Mercury/32's functions can be automated from other applications through a .DLL included with the program, something I've done myself through VB.NET web applications.

If you use Mercury/32, remember there's no 64-bit edition of the program (as the name implies). However, the current edition should run as-is on 64-bit servers without issues. Furthermore, Mercury/32 does not auto-update. Newer versions and patches are published regularly, but must be applied by hand. I ran an older version of the program for nearly a month before discovering that it had been updated. (The update process doesn't take more than a few minutes, so you are generally not going to risk major downtime by upgrading or patching.)