Server Core is Microsoft's preferred method for installing Windows Server 2012. Although the idea of switching to Server Core intimidates some administrators, it's no longer as daunting as it used to be. Here's how to cope with the Server Core installation and transition.

In Windows Server 2008 R2, you couldn't switch between Server Core and a full Windows Server deployment. Windows Server 2012, however, allows admins to enable and disable the graphical user interface (GUI) at will. This facilitates a Server Core installation, because it lets you start with a GUI and then remove it when the initial configuration completes.

There are a number of ways to enable or disable the GUI. One way is to disable it using Server Manager and re-enable it using the SCONFIG utility. But the easiest way is to use simple PowerShell commands. To remove the GUI, use the following command:

To turn the GUI back on, use this similar command:

Adding or removing the GUI requires you to reboot the server; you can initiate a reboot from PowerShell using the Shutdown –R –T 0 command.

Despite the fact that Server Core is the preferred deployment method for Windows Server 2012, a Server Core environment does not support all roles. It only supports the following roles: 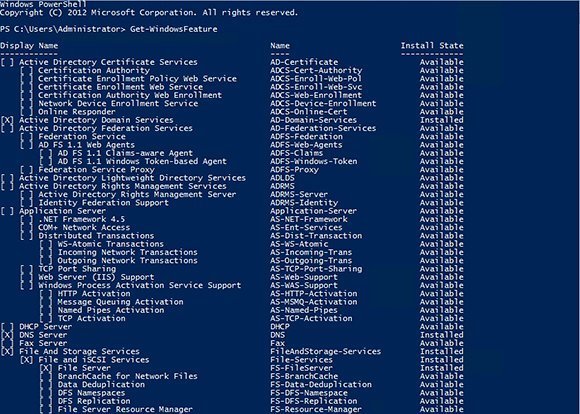 Use the Get-WindowsFeature command to install roles and features.

Installing these Server Core roles and any additional features is fairly simple using the Get-WindowsFeature command (Figure 1), which returns a list of roles and features. Make note of the role or feature's name (as listed in the Name column), and then install the feature using the Install-WindowsFeature command, followed by the name of the feature. For example, to configure the server to act as a DHCP server, use the following command:

When you log into Server Core, a command prompt window displays by default. If you accidentally close this window, press Ctrl+Alt+Delete to launch the Task Manager to return to a command prompt.

Choose the Run New Task command from the File menu.

When the Task Manager opens, click on More Details and choose the Run New Task command from the File menu (Figure 2). At the prompt, enter CMD to launch a new command prompt window. As an alternative, you can type POWERSHELL to launch PowerShell.

This command may not display any output; this is normal. The absence of any command output indicates that Windows has been activated successfully.

Although Windows does assign a random name to Server Core deployments, it's helpful to assign a descriptive name using the following command:

Reboot the machine for the new name to take effect.

Steps for assigning an IP address

Assigning a static IP address through PowerShell takes a little bit of work. The first step is to get the interface index number for the network adapter to which you want to assign the address. You can get this value using the Get-NetIPInterface command.

Once you know the interface index number, you can assign an IP address by entering the following command: 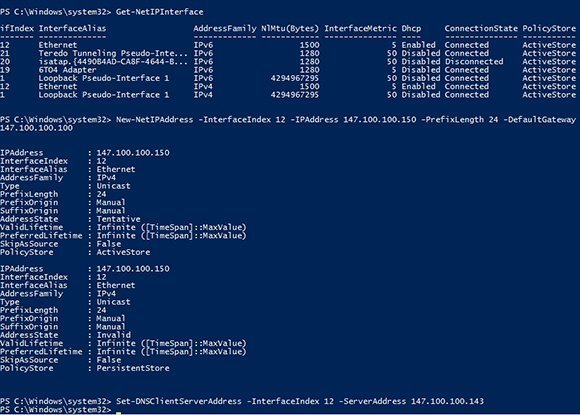 These are the commands used to assign an IP address.

You may also need to add a DNS server. Do this by using the following command (Figure 3):

Working in a Server Core environment isn't difficult. If you have trouble with the initial Server Core installation and configuration, use the SCONFIG command to help you. You can also install the GUI, complete the configuration process and then remove the GUI.

About the author
Brien Posey is an eight-time Microsoft MVP for his work with Windows Server, IIS, Exchange Server and file system storage technologies. Brien has served as CIO for a nationwide chain of hospitals and health care facilities, and was once responsible for IT operations at Fort Knox. He has also served as a network administrator for some of the nation's largest insurance companies.