In this era of PCI DSS and heightened audit requirements, you're likely looking at your Windows servers in a new light – a big, bright spotlight that is.

Using specialized vulnerability scanners such as QualysGuard or GFI LANguard, you can look at your Windows servers from every perspective to find the low-hanging fruit and more obscure weaknesses that can be exploited.

I think we're only kidding ourselves and creating more work when we look at a vulnerability scanner report and assume that just because everything looks bad that it actually is. Case in point: a client of mine was recently told by his outside auditor that all medium- and high-priority (levels 3 through 5) vulnerability scanner findings have to be remediated regardless of the situation. Seriously!?

Once a rarely-performed act requiring specialized skills, basic Windows server vulnerability scans are now a dime a dozen. Unfortunately these scans are often performed and interpreted by people who have very limited knowledge of operating systems, applications, and hacking techniques. It's sort of like a nurse interpreting the results of a CT scan or MRI and totally bypassing the expertise of a well-trained radiologist. We have to step out of this mindset that's leading to these amateurish "the sky is falling" audits, as it's really missing the big picture.

A best practice is to up the ante on the human context you bring to your Windows server security assessments. By doing so, you'll be able to:

Every scenario is different, but you can often count on the same vulnerabilities to create the greatest risks, as shown in Figure 1. 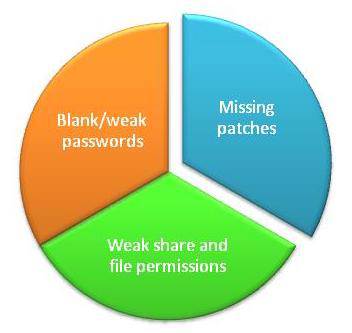 These three vulnerabilities aren't always a problem though. They may be present on a development or quality assurance (QA) network segment that's inaccessible to the rest of the organization, or perhaps these weaknesses are on training servers which are not part of the Windows domain and house no production data. You have to dig in further to see what matters. Going beyond these common issues, I see businesses getting dinged for things like:

The list goes on and on. But what do these items really mean? Are they actual vulnerabilities? Are they as a high-priority as the scanners and auditors make them out to be?

The important thing is to not be fooled. If you get a negative report from a vulnerability scanner, auditor, or outside consultant/security firm, be sure to ask how and why each thing matters in your environment. You can filter out the noise by applying the following questions to each of the findings:

You have to be fair about these questions and give them the attention they deserve. You'll likely find that the majority of findings don't matter all that much in the grand scheme of things.

If and when you get your Windows servers really tightened down and can justify the time, there's nothing wrong with tweaking them to come up with a clean assessment report. Just use some common sense and reasonable discretion – two things we can certainly use more of in IT these days.

ABOUT THE AUTHOR
Kevin Beaver is an information security consultant, expert witness, seminar leader and keynote speaker with Atlanta-based Principle Logic, LLC. Kevin specializes in performing independent security assessments. He has also authored/co-authored several books on information security including Hacking For Dummies and Hacking Wireless Networks For Dummies (Wiley). In addition, he's the creator of the Security On Wheelsinformation security audio books and blog providing security learning for IT professionals on the go. Kevin can be reached at his website www.principlelogic.com.