Windows Vista's ReadyBoost feature allows Windows to treat a USB flash drive as a disk cache. What does that mean?

Disk caches are one way of coping with the inefficiencies of hard disk drives, which are the slowest component in most computers. Any time the computer reads data from or writes data to the hard disk, it must stop and wait for the operation to complete.

In disk caching, an area of memory is reserved for storing copies of recently used or commonly used files. When these files are requested again, Windows can read the files from the cache, which is much faster than the hard disk.

The problem with disk caches implemented by the operating system is that they consume system RAM, leaving less RAM available for other tasks. This is why the size of the disk cache is limited. This is paradoxical. Larger caches mean better performance, but larger caches consume more memory, which has the effect of diminishing performance. But what if you could increase cache size without consuming additional system RAM?

This is exactly what Windows Vista's ReadyBoost feature does. ReadyBoost allows Windows to treat a USB flash drive as a disk cache.

But if hard disk drives are faster than USB flash drives, won't caching files to a slower medium diminish performance? No, and the reason why you can get better performance by using a flash drive cache has to do with the types of reads being made. Hard drives perform much better than flash drives for sequential reads, but hard drive performance diminishes when random disk reads are required. (This is why systems generally perform so much better when their hard disks have been defragmented.)

How much of a performance boost ReadyBoost really gives depends on several things. Random reads of 4KB pages of data are about ten times faster on a flash drive than a hard drive. But this doesn't mean that your system will run ten times faster. Your performance gain depends on the size of the ReadyBoost cache and on the current workload of the system. Generally speaking, the larger the cache and the higher the workload, the greater the performance boost. In contrast, ReadyBoost will provide almost no performance gain on a PC with 4GB of RAM that is being used solely for word processing or Web browsing.

Three things to know about ReadyBoost

Before you start filling every available USB port with flash drives, here are a few things you should know about ReadyBoost.

Microsoft recommends that, on the low end, you use a flash drive equivalent in size to the amount of memory installed in your system. On the high side, the flash drive should be no more than 2.5 times as large as your physical memory. There aren't really any consequences to exceeding the 2.5 times the memory limit, but you won't see any real additional performance gain by using a larger flash drive than that. On the low end, Windows won't stop you from using a flash drive that is too small, but by doing so, you will not receive much of a performance boost.

Setting up ReadyBoost is simple. Insert a flash drive in your USB 2.0 port. AutoPlay will engage and ask if you want to open the folder to view files, or if you'd rather speed up your system. You can see the AutoPlay screen below. 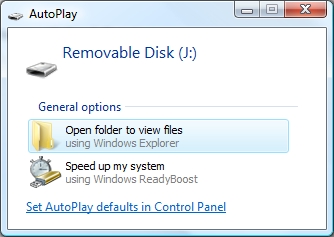 Choose the option to speed up your system. Windows will now run a quick test to make sure that the flash drive is fast enough to improve system performance. You won't actually see the test being run, but Windows must check to make sure that the drive can deliver 2.5 MB/sec random reads based on 4KB data and 1.75 MB/sec random writes based on 512KB data.

Once the speed test is complete, Windows will display the screen below. Select the option to use the device, set the amount of space that you want to reserve as a disk cache and click OK. Now you're in business. 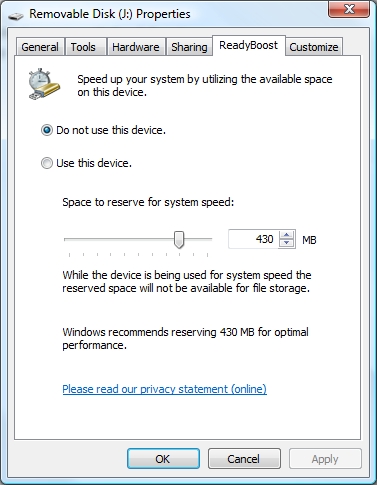