With the improvements made in Server Message Block (SMB) 2.0 in Windows Server 2008 and Vista SP1, Microsoft has delivered a significant upgrade over the original protocol. The SMB protocol was certainly due for an upgrade, as the original 1.0 protocol debuted in the LAN Manager days of MS-DOS and Windows for Workgroups (WFW), back when the typical network might have been a token ring running at speeds as low as 4 Mbps.

More and more of today's business networks are running at 1 Gbps throughout, with 10 Gbps networking already taking root. It only stands to reason that some improvements could be made to Server Message Block with the release of version 2.

One of the most obvious benefits of SMB 2.0 involves the increased file transfer speeds between client and host (workstation and server) and also between hosts. There are, however, some other attractive improvements and changes to the SMB 2.0 protocol with Windows 2008. I'll outline those briefly here before concluding with a real-world example of how SMB 2.0 impacts data transfer operations.

Taken together, Server Message Block 2.0 is a faster, more secure protocol to use for transferring data between clients and hosts, as well as between hosts and hosts (such as in the implementation of Exchange Server 2007's Cluster Continuous Replication log shipping from host to host). Although Microsoft has presented official testing results, and the Tolly Group has issued an officially commissioned white paper on the topic, you'll want to see how SMB 2.0 can benefit your network. The fact is that a production network is never going to respond exactly the same as a closed, carefully controlled test network.

Figures 1 and 2 represent a simple approach to determining how much faster SMB 2.0-based transfers are compared to those from SMB 1.0. In this test, a single 1.75 GB ISO (DVD image) file was copied from a Windows Vista SP1 virtual machine (VM) with a 100 Mbps link. The virtual machine was running on a Windows Server 2003 SP2 R2 host running Virtual Server 2005 R2. The file was copied from the virtual machine to two different hosts, each with identical hardware configurations. The hosts were both HP BL460c blade servers with 4 GB of RAM, 2 x 3.0 dual-core CPUs and 2 x 73 GB 15K HDD in a RAID-1 array. The network latency between the VM client and hosts was approximately 125 milliseconds. One host was running Windows Server 2003 SP2 R2 (32-bit) and the other host was running Windows Server 2008 (32-bit). 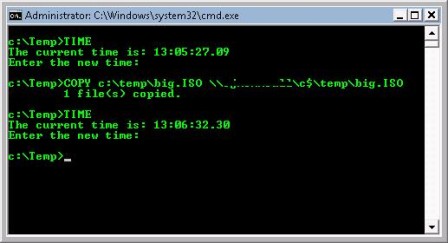 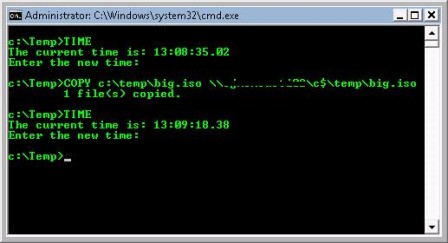 While the test results are hardly scientific, it's really the end-result that matters the most. SMB 2.0 should provide a wealth of improvements in data transfer on your network and give you one tool for battling a slow network.

ABOUT THE AUTHOR
Will Schmied is a senior systems administrator for a world renowned children's research hospital. He holds numerous Microsoft MCITP, MCTS and older certifications and is experienced with Exchange and Blackberry. Will has been actively involved with the certification and training side of IT for many years, writing or contributing to several dozen books. He is a founder of the certification portal MCSE World. Having passed the reigns to a good friend from down under, Will maintains a smaller presence today with his blog, Tales of a Systems Administrator.