Every tool has its niche, and this is definitely true of Microsoft's ClusDiag utility. Whether you manage a single Windows cluster or multiple ones, ClusDiag is a powerful free tool for generating baseline reports and troubleshooting cluster-wide issues.
This three-part series will explain how to download and install the tool, as well as collect logs, generate graphical or text-based reports and troubleshoot problems within a cluster.

The Cluster Diagnostics Tool (ClusDiag) was introduced with the release of Windows Server 2003. Originally, Microsoft included the tool in the Windows Server 2003 Resource Kit and has since made it available as a separate free download.

The tool has two modes to accomplish these goals: an online mode to analyze the configuration and an offline mode for troubleshooting.

As you may know, a new tool from Microsoft was released last year called the Cluster Configuration and Validation Wizard, or ClusPrep.

For all practical purposes, ClusPrep has replaced the verification functionality found in ClusDiag's online mode. However, one of the hidden gems that hasn't been replaced in ClusDiag is its graphical reporting capabilities. ClusDiag is able to graphically display SAN disk configurations, network topologies and cluster resources. This functionality is not found in ClusPrep or its successor in Windows Server 2008. Figure 1 shows an example of a disk configuration report. 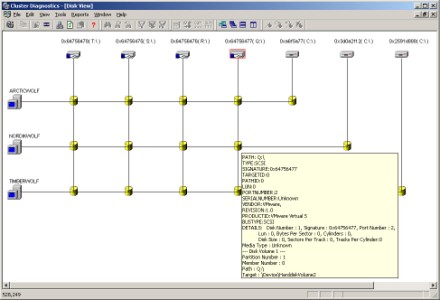 As you can see above, the Disk Configuration view displays the various disks across the cluster nodes. In this example, there is a three-node cluster (Arcticwolf, Nordikwolf and Timberwolf). Each node has access to the shared SAN disks (Q:, R:, S: and T:). By hovering the mouse pointer over a particular drive, ClusDiag explodes the details for the disk including type, signature, target ID, path ID and LUN information.

NOTE: More example reports will be shown in part two of this series on ClusDiag.

In addition to cluster configuration reports, ClusDiag excels with its ability to assist in troubleshooting cluster-wide issues, which include analyzing multiple cluster log files simultaneously, using custom filters to screen the data. The tool has color-coded output allowing you to focus on the error messages in red and scan past the noise or informational output. Figure 2 shows an example of how ClusDiag views and manipulates multiple cluster log files. 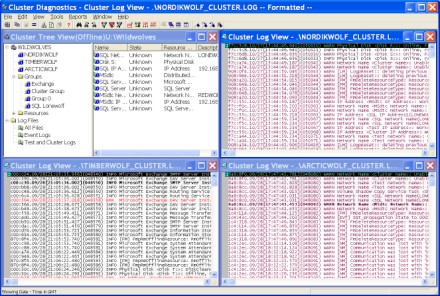 As you can see above, ClusDiag has been started in offline (or troubleshooting) mode. The tool allows you to view one or more cluster log files in separate panes, synchronizing the data between panes based on timestamp or GUM (global update manager) sequence numbers. The output can be filtered to screen out informational messages or to color code the individual entries.

NOTE: These and other helpful features will be discussed in part three of this series.

ClusDiag is a client-server application with the tool being installed on the client. The client can be running Windows XP, Windows Server 2003 or Windows 2000 (Professional or Server). You can use the tool to analyze existing Windows 2000 or 2003 clusters, for Advanced Server, Enterprise or Datacenter Editions.

The installation of ClusDiag is very straightforward. After invoking the ClusDiag MSI kit, you are prompted to accept the license agreement and specify the installation folder. That's it! Once installed, you simply start the tool via Start | All Programs | Cluster Diagnostics Tool, or double-click the desktop icon added during the installation.

When ClusDiag is initially started, it will prompt you to select the mode, either online or offline. If you select online mode, you will need to fill in the cluster name or select the browse button "…" to browse for available clusters. If you select offline mode, you will need to either specify the folder where the cluster log files reside or select the browse button to locate the logs. Figure 3 shows initial ClusDiag menus.

Once invoked, the ClusDiag tool looks and feels very similar to the Cluster Administrator utility used to set up and manage clusters. Depending on the function, ClusDiag will split the window displaying the cluster objects (nodes, groups, resources, etc.) in the left-hand pane and show the details of the highlighted object in the right-hand pane. In offline mode, you will see additional items on the left including cluster log files, event logs and configuration information. See Figure 4 for an example of ClusDiag in online mode.

Now that you've been introduced to ClusDiag, be sure to check out the next two parts of this series. Part two will provide detailed information on how to use ClusDiag's online mode to gather logs, perform verification tests and generate graphical and text-based reports documenting your cluster configurations. We'll then conclude the series by using ClusDiag's offline mode to troubleshoot cluster-wide issues; analyzing multiple cluster log files and event logs; and by using built-in filter and merge functionality.