manifests itself in a number of ways, this tip examines two of the most frustrating problems -- disappearing calendar entries and recurring appointment problems.

Begin the troubleshooting process by opening Outlook and clicking on the Calendar folder. Next, click on Outlook’s View menu, then click the Change View icon, followed by the Active icon (Figure 1). 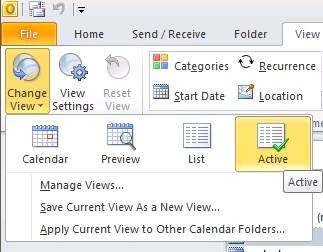 You will see a list of the active appointments for the Outlook 2010 user (Figure 2). Scroll through the list until you locate the corrupted appointment.

After locating the corrupt appointment, delete it. If you can’t delete it, try selecting the appointment and holding down the Shift key while pressing the Delete key. This technique will sometimes works when a regular delete will not. After doing that, restart Outlook 2010 to make sure that the damaged appointment reminder is gone.

This technique usually works, but reminders can return even after you’ve deleted the offending appointment. If you find that the appointment has not been deleted, return to the calendar’s Active view and locate the recurring appointment.

Open the appointment and click the Recurrence icon, as shown in Figure 3. 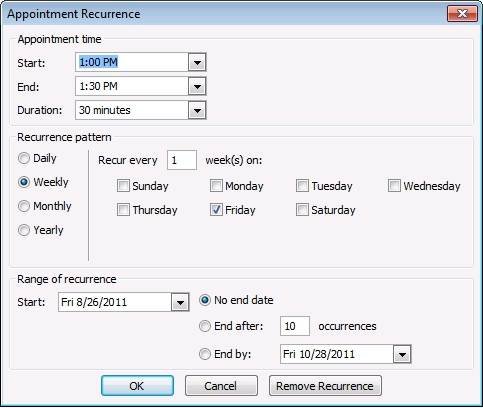 Removing the recurrence should fix the problem. However, you should still try to delete the appointment once more. If you can, you know that that no corrupted appointment remnants remain.

If the technique I described does not fix the problem, you have another option. Start by opening Outlook 2010 from the command line. Launching Outlook 2010 from the command line allows you to use various command-line switches. Although most switches don’t relate to calendar entries, there are some you can use to correct corrupt calendar entry problems.

To launch Outlook 2010 from the command line, open a command prompt window and enter the following commands (assuming that Outlook is installed to the default path):

If you’re running the 32-bit version of Outlook 2010 on a 64-bit Windows operating system, the path will vary slightly. Use these commands instead:

You must append the appropriate switch to the last line of the command set to fix this problem. The calendar-related switches include:

/cleanfreebusy – This switch deletes all of the free/busy information from the Outlook calendar. It then regenerates that information based on data contained on the Exchange server.

Outlook 2010 calendar entries have disappeared
Outlook corruption can also cause all of the appointments in a calendar to disappear.

If this happened to you or one of your users, you may have also lost other forms of data such as contacts and task list items. If this data is gone, there is rarely an easy fix.

However, if the problem doesn’t have to do with missing calendar entries, but rather a corrupt calendar view, there is hope.

You can remedy this problem by resetting the default views. As in the fix above, launch Outlook 2010 from a command prompt window and append the /cleanviews switch.

A word of caution: This switch will reset all of your views, not just the calendar-related views. It also deletes all custom views you’ve created.

If these steps don’t work and you’re at the end of your rope, try logging into Outlook Web App (OWA) instead. If your calendar displays correctly within OWA, you know that although your Outlook profile is corrupt, the information stored on the Exchange server is still valid. In that case, re-image the desktop and start with a clean operating system and a clean copy of Outlook 2010.