One of the most challenging issues for Windows administrators to troubleshoot is when a user application unexpectedly...

hangs or crashes. Due to the intermittent nature of crashes and hangs, it can be very difficult to "catch" the application misbehaving, leaving you with very few clues as to what caused the problem.

Fear not! There are a few simple tools you can use to help isolate the issue to a particular program, DLL, error or condition that may lead you to a documented workaround or patch. This article will survey a variety of free tools, including Mark Russinovich's new ProcDump utility, which can assist you with troubleshooting applications that crash or hang so you can intelligently search the World Wide Web for a solution.

Everyone loves free tools, but sometimes there's still a price to pay for them on the Internet. Free tools often require you to provide an email address before you download them so you can be spammed by product offerings for years to come. They can also open the floodgates for spyware or other Trojans which can negatively impact your server. For these reasons, I rarely download non-Microsoft tools.

Fortunately, Microsoft offers a variety of free tools that can be used to troubleshoot hanging applications and outages. For years now, a tool called Dr. Watson has been available as part of the Windows operating system. When properly configured, Dr. Watson will detect applications that crash and provide a log file and user dump file for troubleshooting. Analyzing this data will often lead to a known error code or condition that has a documented workaround or hotfix. For more details on using Dr. Watson, you can refer to the Microsoft KB articles 246084 and 278689, or Drwtsn32.exe online help. You can also review my previous article on installing and using the Windows debugger, also known as Windbg.

Perhaps a little more useful than Dr. Watson is a tool called ADPlus, which can be downloaded with the Debugging Tools for Windows. ADPlus is a VBScript that can be used to monitor an application for an unexpected condition and capture a user dump file when it occurs. The tool can also be used to force a crash dump on a hung user application, allowing you to analyze the dump with the Windows debugger. Extensive documentation can be found on using ADPlus in Microsoft KB article 286350 or my tip on troubleshooting Windows print spooler outages.

If your troublesome application involves Microsoft Internet Information Services (IIS), then the tool of choice would be Microsoft's DebugDiag. This is a comprehensive tool used to identify a variety of problems including Web server hangs, slow performance, crashes and memory leaks. The tool can also be used with simple Win32 applications that don't involve IIS. You can download DebugDiag from Microsoft and there is abundant documentation on its use including Microsoft KB article 931370and Tim Fenner's tip on using Debug Diagnostics to troubleshoot IIS issues.

Finally, there is a new tool from Microsoft called ProcDump. This utility combines many of the features found in the tools mentioned above, but also contains a very handy feature to dump a process when CPU activity spikes to a predetermined level for a specified period of time. The remainder of this article will examine ProcDump in detail, using Windbg to analyze the dump.

A single executable (procdump.exe) is provided which accepts a number of different options. Without any options, the ProcDump tool will force a memory dump and leave the application running. For example, the following command will force a dump of the Microsoft Outlook application, capturing the memory contents in outlook.dmp:

By using the -h option, ProcDump will detect a hung Windows application and force a memory dump. This is similar to the functionality found in ADPlus and DebugDiag. Using the -e option will cause ProcDump to detect an unhandled exception with the application and capture a process dump. By subsequently analyzing the process dump, you can determine what program, DLL and error condition were present at the time of the outage. This will allow you to intelligently search the Web for similar scenarios to determine if a known issue exists or whether you need to contact the vendor.

What sets ProcDump apart from its predecessors is the ability to detect CPU spikes and collect a process dump when they occur. This is especially useful for intermittent issues when no one is around to intervene. Three options are available to implement this functionality:

To clarify the usage, let's take a look at a simple example. The first command below will start a separate window with a directory command that traverses the system disk. You can then use the tlist command to quickly find the PID (Process ID). Finally, using the ProcDump command specifying a CPU threshold of 10% for at least two seconds on PID 1432 (in this example) should generate a process dump:

Of course this is an unrealistic example of its usage, as one would typically specify a much higher CPU threshold for a longer period of time to avoid transient CPU spikes. But the example does provide a simple illustration of how these options work together to trigger a process dump.

Once the process dump has been written, you can use Windbg to analyze the dump. You will notice in the figure below how the debugger comments that a process has exceeded 10% CPU for two seconds and the corresponding thread ID (0xc2c). The thread ID is important because a process may have multiple threads, so you should focus on the stack pattern of the thread that caused the CPU spike.

Finally, by issuing the debugger ~*kv command, the stack pattern will be revealed for all threads, providing you with the names of the functions being executed. In the example below, you can see how the directory command executes several functions such as cmd!FileIsConsole, cmd!WriteEol, cmd!NewDisplayFile and cmd!WalkTree. While these function names may mean little to us, they can be used as keywords when searching the Web for possible solutions to our runaway process. 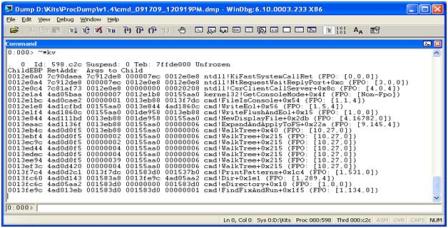 As you can see, there are several free tools available to troubleshoot application crashes and hangs. We saw how Dr. Watson, ADPlus, DebugDiag and ProcDump all provide the capability to capture a process dump. Then by using Windbg, you can analyze the dump and review the stack pattern of the current thread for a crash scenario, or the runaway thread as identified by ProcDump.