The process of troubleshooting a print spooler crash is very similar to troubleshooting a system crash, as discussed in part one of this series. A print spooler, however, may not generate a crash dump on its own, so a tool called ADPlus is used to capture the memory dump. ADPlus is a VB script that can be downloaded for free from Microsoft as part of the Debugging Tools for Windows. Once you install the debugging tools, you will find ADPlus.vbs in the following folder:

ADPlus can be used in two modes depending on whether your print spooler is hanging or crashing. In hang mode, ADPlus forces a process dump on an application, or in this case, a print spooler. The dump contains all of the threads associated with the process in addition to the various DLLs and print drivers involved. A few simple debugger commands allow you to determine which printer is being accessed by the spooler and its corresponding driver.

In crash mode, ADPlus will monitor a process and capture its memory dump when it experiences an unhandled condition. The main difference between the two modes is that crash mode must be established prior to the process terminating, whereas hang mode is used at the moment the process locks up. In either mode, only the process you are debugging is affected; the rest of the processes and the operating system continue without downtime.

Once a process dump is captured, you can then use the Windows Debugger (Windbg) to analyze the failure. As discussed in part one, the debugger can also be downloaded for free from Microsoft as part of the Debugging Tools for Windows.

In the following sections, we'll take a closer look at the steps required to capture a spooler dump, determine which print driver is the culprit and ultimately repair the problem.

As mentioned above, ADPlus crash mode captures a process memory dump when your print spooler is intermittently terminating. Crash mode must be established prior to the problem that is causing the print spooler failure. The very first time you use ADPlus you must establish cscript as the default script interpreter. To accomplish this, open a command prompt and change your default to the Debugging Tools for Windows folder. Then execute the ADPlus.vbs script without any options:

You only need to perform this step once; you are then ready to use ADPlus to capture a spooler crash. Here we see the ADPlus syntax used to set up crash mode detection on the print spooler process:

This command will attach the console debugger (cdb.exe) to the print spooler process and minimize the window. Once an unexpected condition is encountered, the debugger will produce a process memory dump and terminate the process. By default, the dump is written to a subfolder in the Debugging Tools for Windows folder. You can then use the Windows Kernel Debugger to analyze the resulting dump file.

In hang mode, use ADPlus to force a process memory dump when a print spooler either stops responding or becomes 100% compute-bound. This is evident when users complain that their jobs aren't printing even though the spooler process still exists. After forcing the process memory dump, ADPlus hang mode will resume the process instead of terminating it like in crash mode. Here we see the ADPlus syntax used to force a process crash with hang mode:

Once the process dump file has been obtained, use the Windbg tool to analyze the print spooler failure. After installing Windbg, the first step to using the tool is to establish the debugger's symbol path to point to the Microsoft Symbol Server. Next, open the crash dump file with Windbg using the File pull-down menu, Open Crash Dump…, and then issue the command:

This command will perform a preliminary analysis of the dump and provide a best guess as to what caused the failure. The kv command will display the stack trace showing you which drivers or DLLs are involved. A stack trace is read from the bottom up so the top of the stack is the most recently executed function. In the following example, we see a stack trace illustrating a spooler failure caused by the ABCdriver:

Another useful command is !peb, which allows you to see all of the drivers and DLLs associated with the print spooler process. The command displays the process environment block as we see in the following example. Much of the output has been omitted […] as it goes on for several pages: 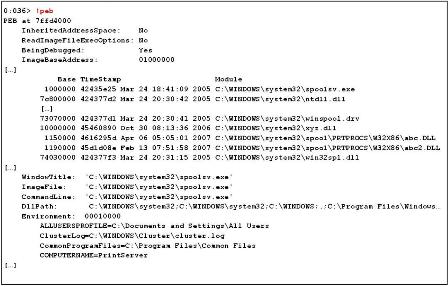 Finally, to determine the printer and job that is being accessed at the time of the failure, use the !teb command. That will display the thread environment block that provides the stack base and limit. You can then display the stack contents with the dc command to reveal the printer that is causing the problem. You will have to scroll through several pages of output, but you will eventually recognize the printer, job and port number in ASCII text to the right:

In this case, the printer name is PRINTER1, the job number is 203, and the port number is 04. The stack contents also contain the associated driver name if you look closely. Once you know the printer and the driver, you can contact the appropriate vendor to determine if an updated driver is available that resolves your issue.

As you can see, troubleshooting a print spooler failure is straightforward once you become familiar with the tools. Starting with ADPlus to capture the dump, then using Windbg to analyze it, and finally leveraging the Web to intelligently search for similar crash footprints will lead you to your solution. Taking matters into your own hands will save you time, money and keep your users happy.

Join Bruce in part three of this series, where he will go over simple techniques for determining memory leaks.