For more than a decade now, NTBackup has been the primary backup solution included with Windows operating systems. When Microsoft created Windows Vista and Windows Server 2008, it finally retired NTBackup and replaced it with a new backup utility, known in Windows 2008 as Windows Server Backup.

As you might have noticed, Windows Server 2008 was designed to let you do just about anything from the command line that you can do through a GUI, and backing up the server is no exception. Microsoft allows you to perform Windows Server Backup operations by using the WBAdmin command.

What to keep in mind about WBAdmin

Before I get started, there are a couple of things I want to mention. First, if you have grown attached to NTBackup, then you need to know that NTBackup is not compatible with Windows Server 2008. However, if you have backups that were made using NTBackup, and you need to restore them, you can download a read-only version of NTBackup that will allow you to restore your backups.

I also want to point out that Microsoft includes the WBAdmin command with Windows Vista. Having said that, there are a number of WBAdmin functions that have been disabled in Vista, so the only way to get full WBAdmin functionality is to use the Windows Server 2008 version.

Backing up your server with WBAdmin commands

On Microsoft's website you can find a list of valid WBAdmin commands, which are the same commands that you see if you open a Command Prompt window and enter WBAdmin /?. I recommend checking out the website at least once, though, because it tells you which commands will and won't work with Windows Vista.

When you look at the list of WBAdmin commands shown in Figure A, it initially appears that WBAdmin is not a full-fledged replacement for Windows Server Backup. After all, the list shows that WBAdmin only supports 12 commands. 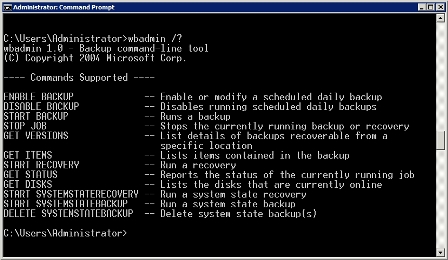 But you have to realize that each of these commands contains multiple sub-commands that allow you to perform pretty much any backup task you could perform through the GUI.

Unfortunately, I can't possibly cover all 12 commands and their various sub-commands within the confines of a single article. What I can do is point you in the right direction by demonstrating how to use WBAdmin to create a backup.

The primary command for setting up a backup is the WBAdmin Enable Backup command. There are several different parameters you can include with this command:

Many of these parameters are identical to the ones used with the WBAdmin Enable Backup command, but there are a few additional parameters you can use to set authentication credentials, control verification and a few miscellaneous things like that.