Monitoring the kernel of the Windows operating system to diagnose performance issues can be a very challenging...

endeavor. Sure Perfmon, PAL and Xperf can show that the OS is spending x amount of time executing in kernel mode, but how can one determine what portions of the kernel (function calls) are consuming significant amounts of time?

In the past, it was necessary to force multiple crash dumps in an effort to profile where the kernel was spending its time. By forcing a memory dump, the debugger is able to display the stack traces of the current threads to determine where the operating system is executing. This can help identify what kernel functions are being called by which threads in an effort to troubleshoot excessive kernel mode times. There has to be an easier way!

Stack walking
Fortunately, there is an easier way: Stack walking. This feature is part of ETW, Event Tracing for Windows. The Xperf tool is used to enable the stack walking functionality that is built into Windows and collect stack traces for threads that encounter various kernel functions or events. This allows the ability to configure which portions of the kernel collect stack traces for threads. Stack walking is available for primitive events such as process and thread creation, file and registry manipulation, and memory allocation. Issue the command Xperf –help stackwalk to see a list of kernel events (flags) that support stack walking.

Powerful (free!) performance monitoring tools you should be using

For example, imagine the server is experiencing high kernel mode times that  seem to be caused by excessive registry updates. Xperf can reveal which threads are calling which registry functions. Xperf will also summarize the data to show  the percentage of time a particular function was executed, giving it a weight. The higher the weight, the more frequently the function is executed. This enables an admin to profile the kernel functions according to what threads are executing them and their frequency.

For example, the following Xperf flags are available for stack tracing when registry events occur:

The result will be a file called stacks.etl that is viewable with the Xperf command:

Configuring and loading symbols
Before call stack information is viewable, it is necessary to establish the symbol path. The symbol path tells Xperf to reference Microsoft’s symbol server on the internet so the tool can lookup module and function names. This allows Xperf to summarize all the call stack information to show which functions are being executed by which threads.

After establishing the symbol path, it is necessary to “load” the symbols. Xperf will connect to Microsoft’s symbol server and download any symbol files that are needed to resolve references to module and function names. There are multiple ways to load the symbols: Use the Trace pull-down menu to select “Load Symbols,” or just right-click a graph and choose “Load Symbols” as seen below:

Viewing the results
After configuring the symbol path and loading the symbols, view the stackwalk data to find what functions are being called by which processes. One of the charts will be the “CPU Sampling” graph where you can right-click the chart to select “Summary Table.” This will produce a table that summarizes processes and the functions they called related to the ETW providers and stackwalk flags that were specified during the event collection.

In the previous example, we used Xperf to collect data on registry functions, because we hypothetically suspected that was causing our high kernel mode time. That's not all Xperf can do; it's just as easy to collect data for any other component of the kernel that supports stackwalk flags such as the file system, process creation and memory allocation. In Figure 2, notice how the regedit.exe process is responsible for the vast majority of registry accesses. You can determine the actual registry functions that were called by expanding the “+” to reveal the call stacks. 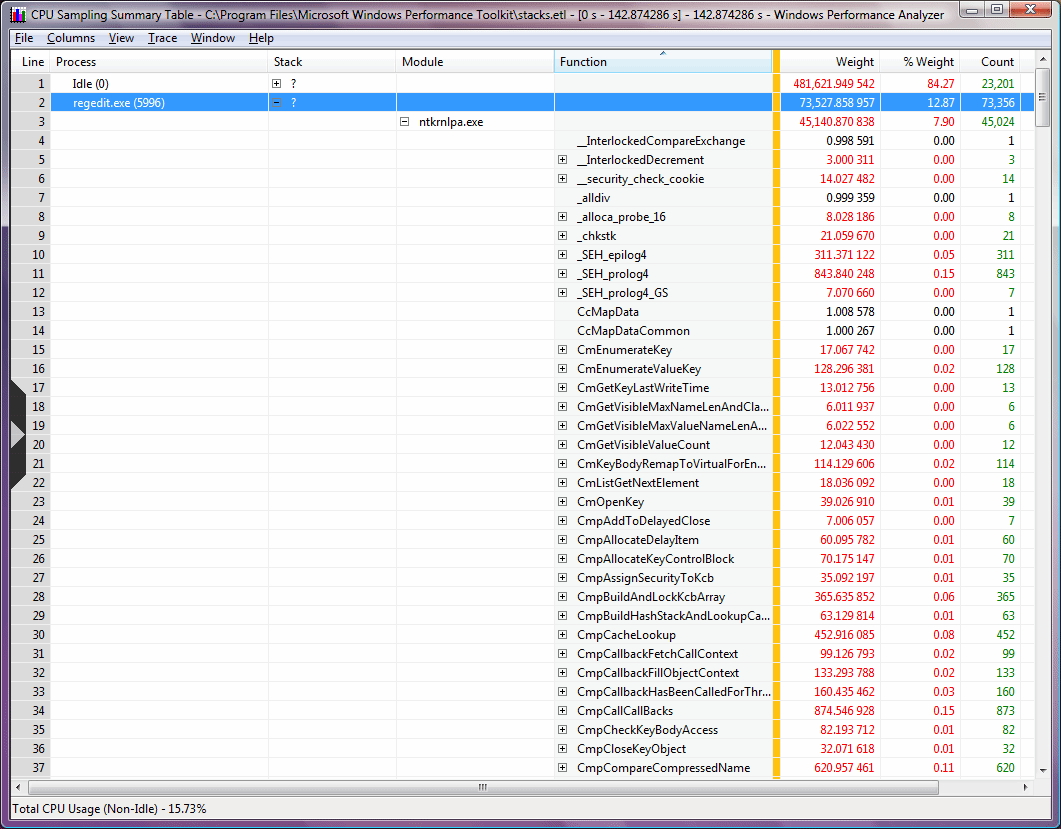 While the tool is fairly intuitive to use, there is plenty of help available. For assistance, reference the help file:

Troubleshooting kernel mode performance problems is never an easy task. But with tools like Xperf and Event Tracing for Windows, much of the guesswork can be taken out by isolating the issue with kernel stack walking.

ABOUT THE AUTHOR
Bruce Mackenzie-Low, MCSE/MCSA, is a master consultant at HP providing 3rd level worldwide support on Microsoft Windows based products including Clusters and Crash Dump Analysis. With over 25 years of computing experience at Digital, Compaq and HP, Bruce is a well known resource for resolving highly complex problems involving clusters, SAN’s, networking and internals. He has taught extensively throughout his career always leaving his audience energized with his enthusiasm for technology.