If you use NTBACKUP as the primary mechanism for backing up your data or if you ever need to perform a restore operation, you may be in for a rude surprise. That's because NTBACKUP becomes increasingly less reliable as the volume of data that is being backed up increases and is prone to creating invalid backups.

The scary thing about this issue is that there are no obvious signs that a problem even exists in NTBACKUP. Backups run normally, without producing errors. The problem manifests itself when you attempt to restore a backup.

During a restore operation, NTBACKUP has no trouble allowing you to browse the backup's index and select the files that you want to restore. Once you start the restore operation, however, NTBACKUP may produce a generic error message, like the one that's shown in Figure A, indicating that the backup file contains unrecognized data and cannot be used.

Figure A: As the volume of data being backed up increases, NTBACKUP becomes less reliable.

Unfortunately, Microsoft does not seem to acknowledge the problem. You can find some older Microsoft Knowledgebase articles referring to this error when you attempt to restore a backup using a different version of NTBACKUP than the one that was used to create the backup. But that particular cause doesn't apply to this situation.

Although Microsoft doesn't have a relevant knowledgebase article on the problem, there are numerous people on the Internet who have reported having the problem. A Google search on the error message reveals posts from many bewildered NTBACKUP users, who are wondering what to do since their backups are invalid.

I don't have any definitive information about the cause of the problem, but I did some experiments myself: It seems that the problem manifests itself when the volume of data being backed up exceeds about 250 GB. Since it takes a long time to back up that much data, I was not able to run enough backup tests to draw any firm conclusions as to the nature of the problem. The only thing I can tell you for sure is that once the size of the backup file grows beyond a certain point, the file is invalidated.

Of course this raises the question of how you can salvage your data. I would recommend using third party backup software instead of NTBACKUP for all but the smallest backup operations. I recently stumbled upon a product called Backup Assist, a backup application based on the NTBACKUP engine. Backup Assist was designed to address NTBACKUP's various shortcomings. Because Backup Assist produces .BKF files like NTBACKUP does, I hoped that I would be able to use it to restore a .BKF file that was created using NTBACKUP. What I found out, though, was that Backup Assist does not have its own restore module. Restores are done through NTBACKUP, which does absolutely no good if you are trying to restore an invalid backup.

Out of curiosity, I attempted to back up the same dataset that had resulted in an invalid backup, but I used Backup Assist instead of NTBACKUP. When I did, I was able to use NTBACKUP to restore the file with no problems. Clearly, the problem lies in NTBACKUP's creation of a backup file, not in the restore operation.

Backup Assist is a relatively low-cost alternative to NTBACKUP that avoids having your backups rendered invalid. But what if you desperately need to restore an invalid backup?

There's a utility called Repair My Backup from Get Data that claims to be able to repair a damaged .BKF file. The company has a trial version of the software that you can download to see if it's going to be able to salvage your data. In my tests, I downloaded the trial version and put it to work. Would it be able to salvage any data from an invalid .BKF file? I found that Repair My Backup works, but it wasn't able to recover everything that I had backed up.

When you initially open a .BKF file, Repair My Backup scans the file for any files that it can recover. It then displays those files within a console that's similar to the one shown in Figure B. In this particular test, though, the software was able to find just fewer than 400 salvageable files on a backup that should have contained many thousands of files. 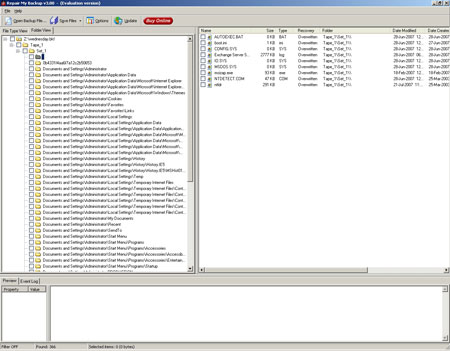 Figure B: Repair My Backup lists all of the files that are available for recovery.

Therefore, my critique would be that using Repair My Backup is an option if you have no other alternatives, but it would be much better to invest in good quality backup software than to expect Repair My Backup to be able to recover everything for you.