When I came up with the idea for the Exam Cram series in 1997, its biggest selling point -- and for years after its introduction, its biggest seller -- was what we called the "Core-Four Bundle." During its heyday, in fact, we were lucky enough to sell 10,000 copies of this boxed set a month, which included titles NT Workstation 4, NT Server 4 in the Enterprise, NT Server 4 and Networking Essentials. I still have a set in the original shrink-wrap and it's a hefty collection of printed material. Here's a photo from Amazon: 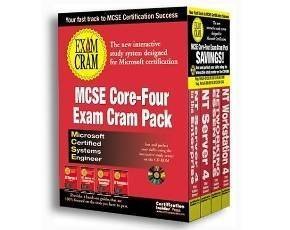 The original Core-Four weighs about 7 pounds

Amazon, which is good about providing information about upcoming books, offers a few clues about what lies ahead for MCSA, MCSE and MCSD coverage. Microsoft Press has already listed MCSA: Windows Server 2012 Cert Prep Pack there, scheduled for release in February 2013. It includes Exam Ref titles for all three exams for that MCSA -- namely the 70-410, 70-411 and 70-412 exams. This can be taken as a sign of an upcoming onslaught of book bundles in the Microsoft certification training category.

I expect Microsoft Press (now a joint venture between Microsoft and O'Reilly) to hit this space hard, with Exam Ref and Study Guide bundles for the following:

I'm not so sure how MCSD will fare in this emerging free-for-all. Developer titles have always run a distant second to administrator/architect titles, and the same general relationship also holds where certification coverage is concerned. Microsoft Press is the most likely publisher to venture into this space, and I'm inclined to believe that other publishers will hold back on developer stuff until they have a good sense of how actively these certifications are being pursued.

As for MCSA and MCSE bundles from other publishers, you can count on it. I expect others to get into this game, such as the following:

Just to make things even more interesting, I also expect training companies such as TrainSignal, New Horizons, Global Knowledge and others to at least take a shot at offering their own bundles -- including books, online or video training, practice exams, flashcards, and virtual labs -- for these very same credentials, too. Given that virtual delivery makes the cost of goods a much smaller factor in delivering them online, there's a lot more room for many more players to get involved in this lucrative and popular market segment.

So get ready, Certification World: The bundles and packages are coming.

Ed Tittel is a full-time freelance writer and researcher who specializes in Windows operating systems, markup languages and information security. He blogs thrice weekly for TechTarget's IT Career JumpStartand Windows Enterprise Desktop blogs, and once a week for Tom's IT Pro (Making It in IT) and PearsonITCertification.comblogs. A contributor to more than 100 computing books, Tittel is best known for creating the Exam Cram series of IT certification prep books.