that lets admins manage multiple user identities and access. Although it's been lurking in the background of other Microsoft products for some time -- and still requires work to make it a fully useful tool -- it's a step in the right direction.

At its core, Windows Azure Active Directory is essentially a copy of Active Directory held in the cloud that provides basic authorization and authentication when users access cloud services. Ideally, admins use it to centralize the database of authorized users for cloud services, which then lets them authorize employees and contractors to work in certain applications. This allowance includes both Microsoft and third-party applications that accept authentication through common industry standards.

Through synchronization with an on-premises Active Directory deployment, you can also deploy single sign-on, so users don't have to remember multiple passwords or enter them more than once to access cloud applications. More importantly, it provides a better way to remove access to cloud services for users who have left the company -- a previous weak link in the cloud identity management story.

According to Microsoft, since just after the beginning of the 2013 calendar year, "Windows Azure AD has processed over 65 billion authentication requests while maintaining 99.97% or better monthly availability." Windows Azure Active Directory is a distributed service running across 14 of Microsoft's data centers all over the globe. 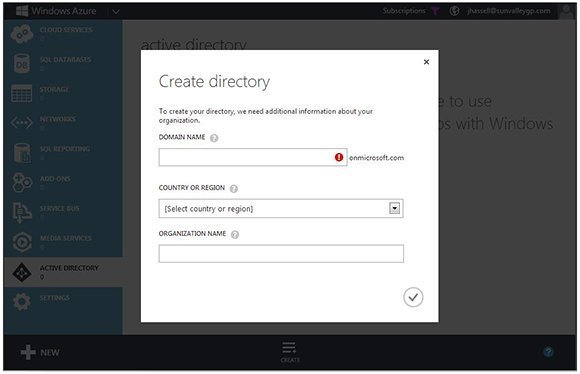 Objects in any given instance of Windows Azure Active Directory can belong to one of the following types:

The first time you connect your on-premises ADFSv2 instance to Windows Azure Active Directory, a tool called Directory Synchronization (DirSync) runs. DirSync makes a copy of your local directory and then propagates itself to the cloud tenant AD instance. After that, DirSync runs every three hours to push changes from the on-premises directory to the cloud instance.

DirSync only goes from on-premises to cloud. If you were to create a new user on your Windows Azure Active Directory tenant, that user would live only in the cloud and would never be propagated down to the on-premises directory.

Given the push toward cloud computing, it was high time that Microsoft made something available to help admins understand identities that exist in multiple places for multiple services. Even though it's frustratingly limited in its current incarnation, Windows Azure Active Directory is a great first step. As a cloud service, it will likely be improved rapidly in the weeks to come.

About the author
Jonathan Hassell is an author, consultant and speaker on a variety of IT topics. His published works include RADIUS, Hardening Windows, Using Microsoft Windows Small Business Server 2003 and Learning Windows Server 2003. Jonathan also speaks worldwide on topics ranging from networking and security to Windows administration. He is president of 82 Ventures, based in North Carolina, and is currently an editor for Apress, a publishing company that specializes in books for programmers and IT professionals.