Suffice it to say, there are a lot of Microsoft Windows product licensing options.

Let's look at some of these options and review the licensing changes for virtual servers, Windows Server 2008 R2 and Windows 7. Organizations with as few as five licenses can take advantage of volume licensing, and pricing and financing options will benefit both large and small organizations. There are a couple of good resources that cover volume licensing questions as well as quotes.

The Microsoft License Advisor (Figure 1) is an interactive resource where you can build a licensing quote, find advanced options if you've used it before and ask questions about the licensing products to find the one you need. 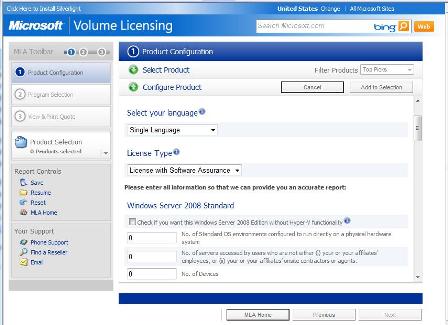 The Microsoft Volume Licensing reference guide explains all of the volume licensing options in a fairly easy to understand format. There is an excellent comparison table on page 29 that gives an overview of how each volume licensing product can be used effectively.

Smaller organizations should look at the Microsoft Open Programs. There is a wide variety of options to fit specific needs, such as payments, and for varying product needs in an organization, such as pricing. My recommendation is to study the options first, then use the Microsoft License Advisor to generate some quotes.

I won't go into each licensing scenario here, but there are a couple of notable options for enterprises: the Microsoft Select License Agreement and the Software Assurance Program.

The Microsoft Select License program is intended for companies with 250 PCs or more that require different products. The program lets organizations have control from one license product. Think of it as a catalog of Microsoft products that uses a point system, and each product order counts for a select number of points and you pay for the points. The reference guide has more information.

The Software Assurance Program is a good way to make sure you have the most recent software updates. When a new version of a product comes out, you will be on the priority list to get the new software. This program is really an add-on to licensing programs and its benefits include:

Prior to September 2008, Microsoft tied the server application licenses to the physical machine, and thus prevented moving virtual machines from one server to another within a 90-day period. In other words, they could move, but an IT administrator had to wait 90-days to move them again, making technologies such as VMware's VMotion and Microsoft's new Live Migration legally impossible without acquiring extra licenses.

In September 2008, Microsoft removed the 90-day restriction for volume licensing customers only. I don't believe that hurts small and medium-sized businesses; they can purchase volume licensing contracts for as few as five licenses. If they have fewer than five licenses, they probably won't be virtualizing many – if any – servers.

Although Windows Server still does not allow license movement inside of 90 days, it will not affect the use of Windows Server 2008 R2's Live Migration or VMware's VMotion because every server will need to have a Windows Server license -- just make sure they match. Thus, if you had two servers, each with a Windows Standard license, that would give you one Virtual Machine license, which would support moving one VM between machines, and the same would be true for Windows Enterprise.

Very large customers will probably prefer to just use Windows Server Datacenter Edition with unlimited VM licenses and not worry about it. In a situation where you want to replace a server with new hardware and decommission the old, it is permissible to move the license to the new machine. Windows Server licenses are issued on the "honor system" and there is no programmatic enforcement, such as a Client Access License for applications. From a legal standpoint, however, you must honor the license requirements.

Gary Olsen is a systems software engineer for Hewlett-Packard in Global Solutions Engineering. He authored Windows 2000: Active Directory Design and Deployment and co-authored Windows Server 2003 on HP ProLiant Servers. Gary is a Microsoft MVP for Directory Services and formerly for Windows File Systems.