Power Gadgets is not an Exchange Server-specific product. It's is an add-on for Microsoft Windows PowerShell, on which the EMS was built. This can be problematic.

When you install Power Gadgets, it creates a special version of Windows PowerShell, which allows the use of commands specific to the add-on tool. This means that Power Gadget-specific commands aren't available through the Exchange Management Shell. There is, however, a workaround.

Executing this command makes Power Gadgets available through the Exchange Management Shell. So, how does the EMS interact with the tool? Power Gadgets adds three different commands to the Windows PowerShell: Out-Chart, Out-Gauge and Out-Map.

The syntax for creating a simple HTML report in the Exchange 2007 EMS is:

When working with the Exchange Management Shell, anytime a command contains the pipe symbol (|), it means that you're taking output from one command and feeding it into a second command. Therefore, we can add a | to the end of the above command, and append the Out-Chart command.

We could use the Out-Chart command by itself, but there are some additional parameters that we can supply to make the chart look nicer. For example, the –Titles parameter allows you to specify a title for the chart. You will also recall that we have extracted two different pieces of information for each mailbox; the item count and the display name.

Figure 1 shows what the command looks like, and shows the command that was used to import the Power Gadgets into the Exchange Management Shell. The resulting chart is shown in Figure 2.

Figure 1. Use the Out-Chart command in the Exchange Management Shell. 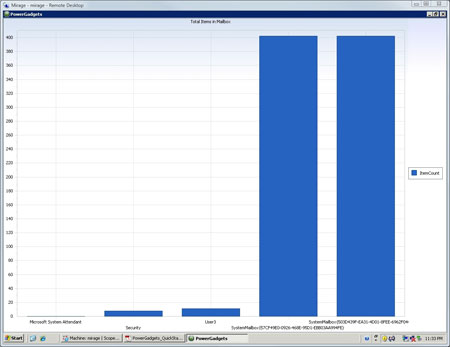 Keep in mind: Power Gadgets is very flexible; this only shows a small sample of what it can do. All Power Gadgets charts are fully customizable. The syntax of the Out-Chart command also extends beyond what has been covered in this article. Power Gadgets licenses are $99 per seat.

About the author: Brien M. Posey, MCSE, has previously received Microsoft's MVP award for Microsoft Exchange, Windows Server and Internet Information Server (IIS). He has served as CIO for a nationwide chain of hospitals and was once responsible for the Department of Information Management at Fort Knox. As a freelance technical writer, Brien has written for Microsoft, TechTarget, CNET, ZDNet, MSD2D, Relevant Technologies and other technology companies. You can visit Brien's personal website at www.brienposey.com.