Most of Microsoft Outlook's customization files are located in the user's profile directory. Figure 1 shows the most familiar files. 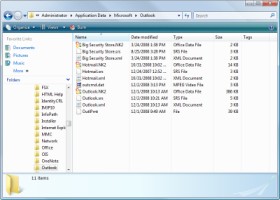 The user profile directory also contains several other types of Outlook data files. Where they reside in Windows Vista, however, may surprise you.

The user profile directory is located in a different location in Vista than it was in Windows XP. In Windows XP, for example, it could be found in: \Documents and Settings\user name\Application Data\Microsoft\Outlook.

Microsoft restructured the file system's user profile section when it released Windows Vista and retained some legacy folders for backward compatibility. Windows Vista stores all user profile folders beneath a folder named Users, instead of beneath the Documents and Settings folder. While the Documents and Settings folder still exists, it isn't technically a folder. Instead, it's actually a shortcut to the Users folder. 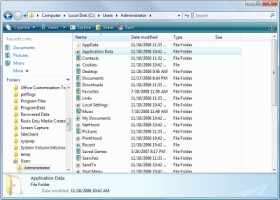 Figure 2: The Application Data folder isn't really a folder at all, but rather a shortcut to the hidden AppData folder. 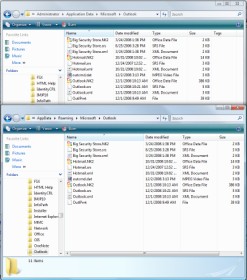 The \Local folder contains its own \Microsoft\Outlook sub folders. This is where the remaining Outlook data files are stored.

Do you have comments on this tip?  Let us know.