This is part 6 from "Creating and managing recipients in Exchange Server 2007," excerpted from Chapter 3 of the book Microsoft Exchange Server 2007: A Beginner's Guide, written by Nick Cavalancia and published by The McGraw-Hill Companies, copyright 2008.

Figure 3-37. Navigate to the Distribution Group node. (Click on image for enlarged view.) 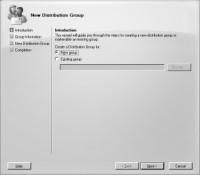 On the Introduction page of the wizard, you can choose to create a new distribution group. Or, by selecting an existing group, you will mail-enable an existing security group in Active Directory. For the purposes of this chapter, I'll select New Group and click Next. On the Group Information page of the wizard (Figure 3-39), you'll need to decide whether you'll be creating a distribution or security group and provide general information about the group. The difference between the two is that a distribution group is only used for email purposes, whereas the security group can be used for email purposes, as well as to grant permissions to resources. Once you are done, click Next. 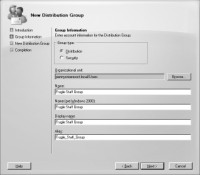 The New Distribution Group page summarizes the information you provided. After you click the New button, the Completion page lists the outcome.

To create a new distribution group, run the following command:

Creating a dynamic distribution group is similar to creating a regular distribution group, with the exception of needing to establish the dynamic membership. Figure 3-40 shows the first additional wizard page where you define the recipient types that will be included in the group membership. 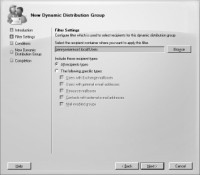 Once you've defined the types of recipients, the Conditions page (shown in Figure 3-41) gives you several options to choose from to further hone the dynamic membership of the group. Unfortunately, there is no way in this release of Exchange to create your own custom conditions or to use an LDAP query. 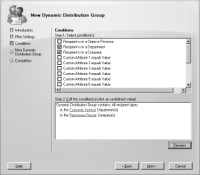 Once a distribution group is mail-enabled, you can send messages to it, and it will act like a distribution list. The distribution group will be expanded to reveal its members, and the message will be sent to each recipient in the group. The nice thing about this is that you can minimize administrative effort by using user groups that were created for assigning permissions to resources to also act as distribution lists for those members who are mail-enabled. Of course, a mail-enabled group need not be a security group, but these two functions can be accomplished with the same Active Directory object.

Once the group is created, you can review its properties and see that there are a number of configuration options. Since many of them are self-explanatory, we'll only mention a few here.

On the General tab, you can specify a unique alias for the distribution group. This is especially helpful if the group's name is long and you don't want to force users to type in such a long name. Also, on the Mail Flow Settings tab, message size limits can (and should) be set, as well as from whom messages will be accepted.

Now, there are a couple of things to keep in mind. First, the wider or broader the scope of the distribution group, the more tightly message originators should be controlled. For instance, you don't want to leave the default option, Accept Messages From Everyone, for the All Company Users Distribution list. Can you see it now? A disgruntled employee is on his way out the door and spams everyone in the company with pornographic images. Not a good thing, right? So increasingly tighten who can send messages to a distribution group as the group's scope widens.

Second, you'll want to limit the message size the group can receive. I once worked in a company where the owner would spam everyone in the company (80 users in three cities) with unzipped scanned images of magazine articles about the company. When dialing in over a 56.6-kilobytes per second (Kbps) connection (at the time, employees only had dial-up), it took over 20 minutes to download the email, because he didn't identify it in the subject line as an email with a large attachment.

While such situations might be politically difficult to manage, they need our attention as administrators. We should be attentive to how message size affects our remote users and, therefore, we should be diligent about enforcing message size limitations.

With the Single Instance Storage (SIS) feature of Exchange 2000 Server (see Chapter 15), we don't need to be as concerned about our databases growing out of control because of large message spamming; however, we should be concerned about the amount of bandwidth that large message spamming consumes. Be careful to perform regular capacity planning for your network, and ensure that you have set the message size limits at the largest, but optimal, setting possible.

On the Advanced tab, shown in Figure 3-42, you'll need to decide if a specific expansion server needs to be specified. This is done by using the Expansion Server drop-down list box. 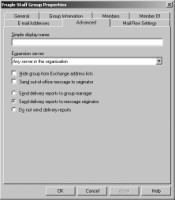 The purpose of the expansion server is to specify which server will expand the membership list of the distribution group, and perform its routing and selection process to send the message to each group member. This is both a RAM- and a processor-intensive activity. For groups with a small membership of fewer than 50 or 75 members, this is not a big deal and can be performed on any server in the administrative group.

On the Advanced tab, you can specify how delivery reports should be handled and whether out-of-office messages from recipients should be sent to the originator of the message. Generally, you'll want to leave this check box unselected; but there might be certain kinds of distribution groups, such as time-sensitive messages or mission-critical groups, where having an out-of-office message sent to the originator would be a wise course of action.

Part 6: How to create and configure Exchange 2007 distribution groups

This chapter excerpt from Microsoft Exchange Server 2007: A Beginner's Guide, by Nick Cavalancia, is printed with permission from The McGraw-Hill Companies, copyright 2008.