When trying to understand the purpose of the Exchange Management Shell in Exchange Server 2007 and the ability to perform tasks from the command line, consider the Windows Control Panel. The majority of options available to you through the Control Panel directly affect various registry values. When you implement a setting through the Control Panel, you're editing the system registry. Countless registry settings are only available by running the Registry Editor.

The commands used within the Exchange Management Shell follow a verb-noun format; it uses 10 primary verbs (Table 1). This list isn't all-encompassing. Other verbs, such as Export and Connect, are used less frequently.

Table 1. Primary verbs and commands of the Exchange Management Shell.

Verbs are always followed by a dash and a noun. The noun typically refers to an Exchange object; additional parts of the command may refer to individual attributes of that object.

T he Get command in the Exchange Management Shell lets you retrieve information about a specified object. The most familiar Exchange Server object is likely the mailbox. Not surprisingly, the Get command can be used in conjunction with the word Mailbox to retrieve information about a mailbox. If you enter the Get-Mailbox command, you'll see a screen similar to that shown in Figure 1.

Figure 1. The Get-Mailbox command in action. (Click on image for enlarged view.)

The first thing that you may notice on this screen is the yellow text. When the Exchange Management Shell displays command output, warnings are displayed in yellow and errors are displayed in red. In this example, warning messages indicate that mailboxes are corrupt; however, this warning is incorrect.

When you issue the Get-Mailbox command without including any additional parameters, the Exchange Management Shell retrieves information about every mailbox in the entire Exchange Server 2007 organization, regardless of the server on which a mailbox resides. In this particular case, the two mailboxes for which warnings were displayed reside on an Exchange 2003 server.

If you ignore the warning messages, there are two problems with information that the Get-Mailbox command provides.

Results that the Get-Mailbox command produces can be changed. For example, to limit the results to mailboxes residing on a specific server, use the following command:

Warning messages don't appear in Figure 2 because we're looking at mailboxes residing on an Exchange 2007 server only. 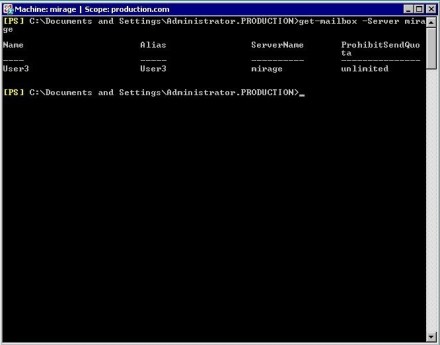 It's helpful to filter results based on individual attributes. The real issue is knowing which attributes are available. Microsoft offers information related to various commands, including a useful KnowledgeBase article on the Get-Mailbox command. You can also use the -? parameter. Entering Get-Mailbox -? prompts Exchange to display the command's full syntax.

Brien M. Posey, MCSE
Brien M. Posey, MCSE, has previously received Microsoft's MVP award for Exchange Server, Windows Server and Internet Information Server (IIS). Brien has served as CIO for a nationwide chain of hospitals and was once responsible for the Department of Information Management at Fort Knox. As a freelance technical writer, Brien has written for Microsoft, TechTarget, CNET, ZDNet, MSD2D, Relevant Technologies and other technology companies. You can visit Brien's personal Web site at http://www.brienposey.com.