Address lists are managed in the Exchange Management Console on the Mailbox node under Organization Configuration in the console tree. They can be found by selecting the Address List tab in the results pane. Address lists are created by using filter rules—rules that search Active Directory and find objects that match a predefined set of criteria. Once all the objects are accumulated, a list is built and it becomes an address list.

Figure 3-43 shows the Introduction page of the Edit Address List Wizard when editing the All Users address list. You'll notice the recipient filter in Figure 3-43 showing the LDAP filter that the list will return from Active Directory. 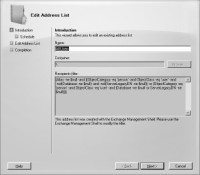 Default lists are provided for All Contacts, All Groups, All Rooms, All Users, and Public Folders. Additional rule sets can be created by selecting New Address List in the action pane and following the wizard. Interestingly enough, you really don't need a developer to create these rules. Exchange asks for the types of recipients and allows you to specify that the recipients belong to a certain company, department, or state/province.

An address list is another object in the directory, so it will have an Access Control List (ACL) for security purposes. This means that you can create an address list, and then specify who can access it by assigning permissions to the list using users and groups in Active Directory. Some address lists, such as top corporate executives or those who hold sensitive positions, may not want their email addresses available to everyone. Use the ACL to limit who can see sensitive address lists. By default, the Everyone group is not given any access and the Authenticated Users group is only given List Contents permissions. 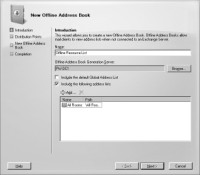 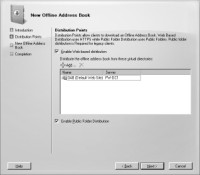 In the next chapter, we'll take a look at how public folders are created and managed. This is a more complex topic, but just as necessary to performing good day-to-day Exchange administration. Despite solutions like SharePoint Server to make information available to multiple users, public folders are still a very large part of most Exchange installations, so don't skip over the next chapter.

Part 6: How to create and configure Exchange Server 2007 distribution groups