Clustered Continuous Replication (CCR) is a high availability Microsoft Exchange Server 2007 solution that adds the new log file shipping and replay features to eliminate the single point of failure that exists in today's standard Windows 2003 active/passive cluster setup. With a Clustered Continuous Replication setup, transaction logs generated on the active node are replicated to the information store on the passive node. In the event of a database corruption, this allows both Exchange 2007 services and databases to fail over to the passive node. CCR can only be deployed in a two-node active/passive cluster.

Excerpted from How to Cheat at Configuring Exchange Server 2007: Including Outlook Web, Mobile, and Voice Access, by Henrik Walther, this tutorial provides an overview of the CCR feature and provides step-by-step instructions on how to configure and manage a Cluster Continuous Replication-based setup in Exchange Server 2007.

Exchange Server 2007 introduces another new high-availability feature called Cluster Continuous Replication (CCR). This feature takes the new Exchange Server 2007 log file shipping and replay mechanisms (known as continuous replication) and combines them with the features that are available in a more traditional two-node Windows 2003 server active/passive cluster setup. A traditional two-node active/passive cluster has its benefits but has also always had one major drawback: You still have a single point of failure when it comes to the information stores. CCR provides redundancy for both Exchange Services and the information stores.

As is the case with traditional Exchange clusters, CCR uses Windows Clustering Services to provide virtual servers (which, in Exchange 2007, are called clustered mailbox servers) and failover capabilities. CCR has one big difference from traditional clusters, though, and that is that functionality doesn't require any kind of shared storage subsystem, because each node contains a local copy of the information stores. This eliminates the dependency on SAN technology in the cluster design, which makes CCR a more cost-efficient solution because you can use a storage option such as Direct Attached Storage (DAS) or Serial Attached SCSI.

Another thing worth mentioning about CCR is that the feature supports stretched clustering (called geoclustering), but bear in mind that the nodes must belong to the same subnet. This means that as the cluster is stretched between the locations, the subnet must be stretched, too.

Last but not least, you can reduce the frequency of backups and restores as well as perform backups of the databases on the passive node, and thereby not impact the performance of the active node. In Figure 8.29 you can see a basic CCR scenario. 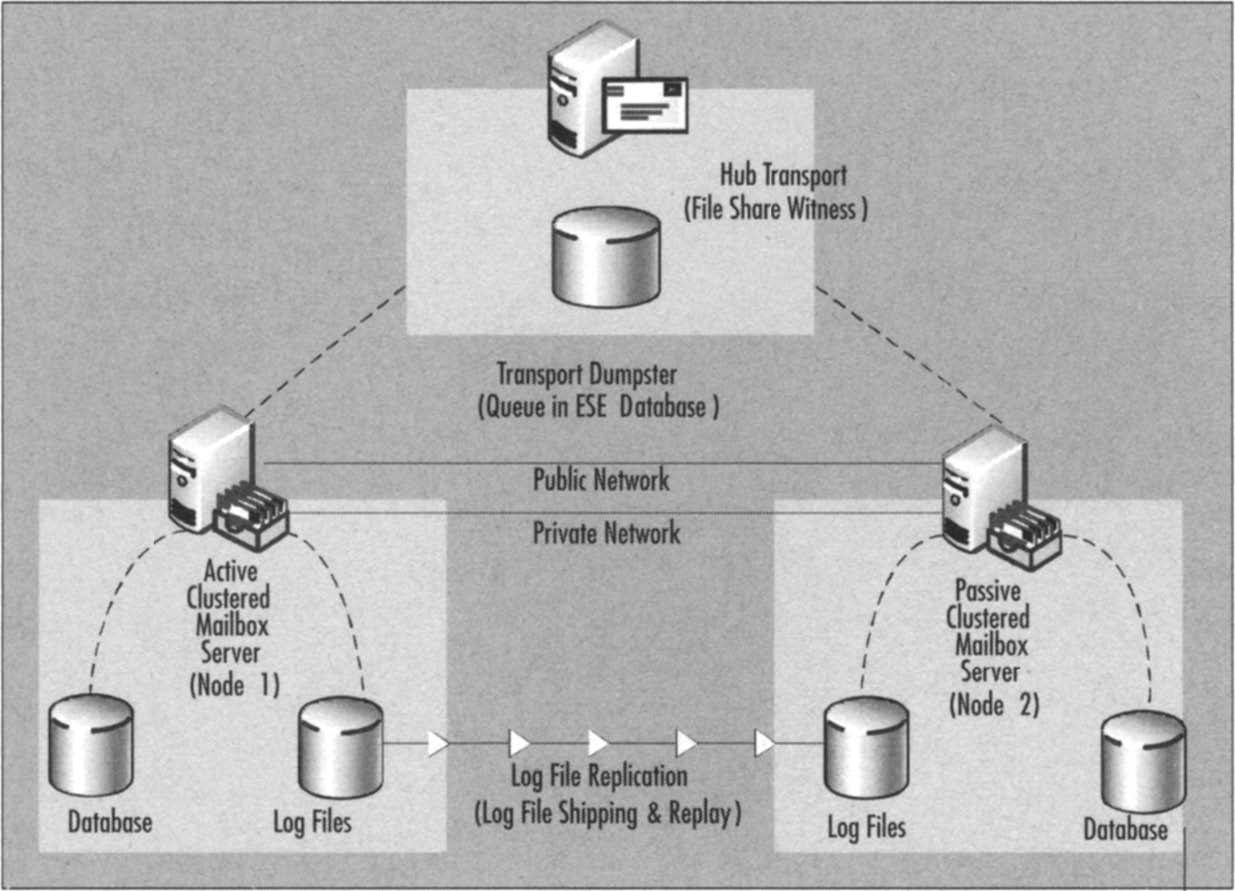 To set up a CCR-based cluster, the following are required:

You also need to apply the update mentioned in MS KB article 921181 to both servers that will act as nodes in the Exchange Server 2007 Clustered Mailbox setup. The update adds a new file share witness feature to the current Majority Node Set (MNS) quorum model. The file share witness feature lets you use a file share that is external to the cluster as an additional "vote" to determine the status of the cluster in a two-node MNS quorum cluster deployment, which is a requirement to use the CCR functionality in Exchange Server 2007.

To deploy CCR, the following hardware requirements must be met:

In addition to the software and hardware requirements, you also should be aware of the following general requirements:

Return to table of contents or proceed to part 2 on setting up a Cluster Continuous Replication in Exchange 2007.