The Single Copy Cluster (SCC) is a high availability solution for the Mailbox Server role that has been vastly improved with the creation of Exchange Server 2007. This clustered mailbox server, similar to that of an Exchange 2000/2003 active/passive cluster setup, provides service failover using a single copy of a storage group that is shared between the nodes.

Excerpted from How to Cheat at Configuring Exchange Server 2007: Including Outlook Web, Mobile, and Voice Access, by Henrik Walther, this tutorial uses a Virtual Server 2005 R2 environment to guide you through the set up, installation and management of the Single Copy Cluster function in Exchange Server 2007.

In addition to the CCR type of setup, Exchange 2007 supports the Single Copy Clusters (SCC) type, which, as mentioned in the beginning of the chapter, is more or less identical to the traditional active/passive clusters we know from previous versions of Exchange. This means that an SCC-based cluster only provides service failover and still has a single point of failure when it comes to the databases, unless a shared storage solution that provides redundancy in other means is used in the environment. An SCC-based cluster using a fault-tolerant SAN is just as good as a CCR-based cluster in terms of data availability, but such a solution is much more expensive than a CCR solution.

An SCC is basically a clustered mailbox server that consists of two or more servers (known as nodes) that share the same storage (for databases and log files). The shared storage subsystem is typically a SAN. In Figure 8.77 you can see what the architecture behind a typical SCC scenario looks like. 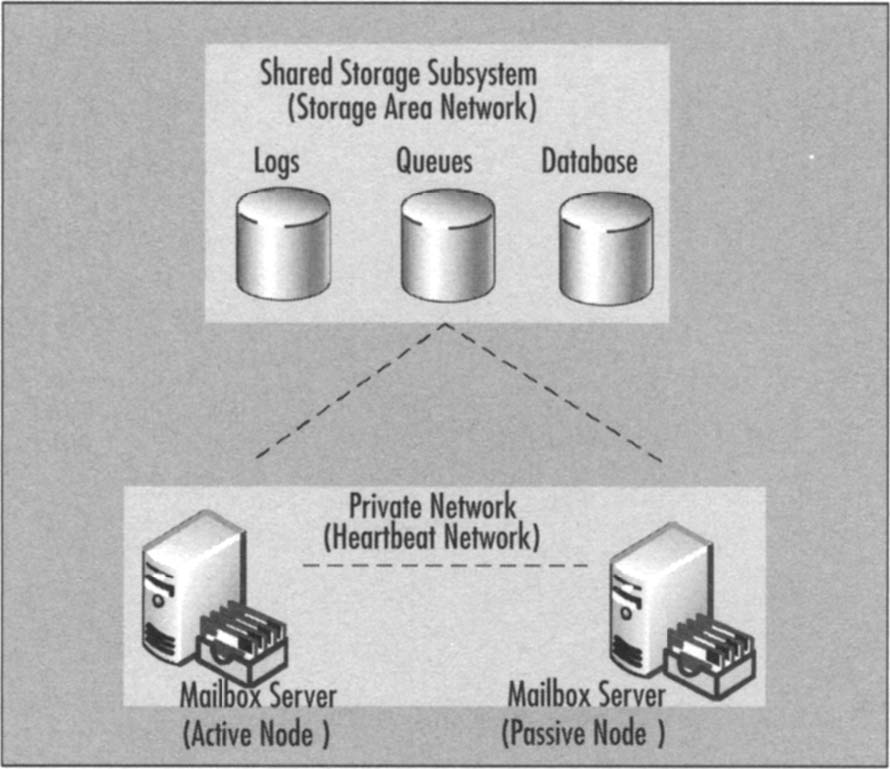 The primary benefit of an SCC is that it provides high availability of server resources because one node takes over should the active node be taken offline or fail for some reason. In addition, you can apply hotfixes, service packs, and the like to the nodes without having any downtime of your mission-critical mailbox servers. However, bear in mind that an SCC is susceptible to failure of the shared storage subsystem. This means that no matter how many nodes are part of your cluster, you'll always have a single point of failure when you're using SCC opposite a CCR-based cluster, which, as we demonstrated, provides storage group failover via the new log file shipping and replay functionality.

Since most of you don't have the necessary hardware for a cluster, before you actually decide to deploy one in your environment, we thought it would be a clever idea to show you how to install an SCC in a Virtual Server 2005 R2 environment. Pretty much all the steps in this section can be used to install the SCC on real hardware, too.

To follow the steps throughout this section, you need the following:

Return to table of contents or proceed to part 2 on how to create quorum disks for an Exchange 2007 Single Copy Cluster.