Once the iSCSI SAN volumes are ready for use on the Exchange Server, it is time to move data over to the volumes. This is a pretty straightforward task that most Exchange administrators will already be familiar with. The tasks and interface are slightly different for Exchange 2003 than for Exchange 2007, so I'll talk about them each briefly. 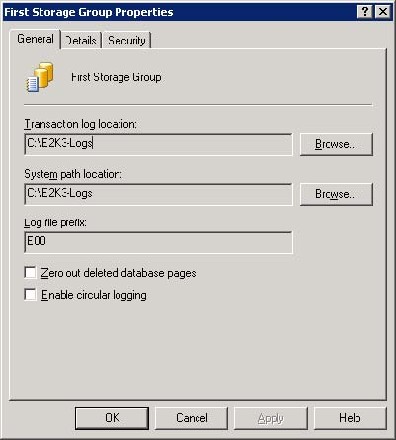 When you change the location of the transaction logs or the system path, you will be warned that if you continue, all databases in this particular storage group will be dismounted. Any users using these databases will be disconnected. Depending on the number of logs to move, this may take a considerable amount of time.

Exchange 2003 stores are moved using the properties of the mailbox store. Figure 3.22 shows the Database property page of a mailbox store properties. From this screen, the administrator browses the available disks and specifies new locations for the native content database (EDB file) and the streaming database (STM file). 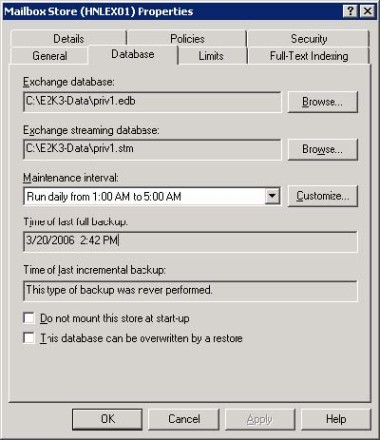 Just like moving the transaction log files, when the administrator specifies the new location for the EDB and STM files and clicks Apply or OK, the store is dismounted, users are disconnected, and the files are moved. For larger database files, this task can take a considerable amount of time. Exchange databases should not be moved when doing so could interfere with user operations. If you work in a 24 × 7 shop, consider creating new mailbox stores on the new volumes and move the mailboxes over a few at a time.

NOTE: One interesting tip I have learned is that you can also rename the EDB and STM files when you move them. Doing so can be useful if you are trying to standardize your database file names or if you are not happy with how you originally named them.

Another difference is that Exchange 2007 does not have the streaming database file, just a native content file (EDB file). The databases are just referred to now as 'databases' rather than stores.

Finally, we have an additional option for moving database files and transaction logs. We can either use the GUI or the command-line interface. Let's look at both methods for moving the files. First is the Exchange Management Console (EMC); this is the GUI for Exchange 2007.

NOTE: Prior to moving Exchange 2007 databases or transaction logs, suspend local continuous replication if you have implemented it.

First we need to load the EMC and navigate to the Server work center and then to the Mailbox subcontainer. This is where we will find the Mailbox servers and thus the storage groups and databases. Locate the storage group whose files you want to move to another volume and select it. You can either right-click it and select Move Storage Group Path or you can select that option from the Actions pane of the EMC. Doing either launches the Move Storage Group Path wizard (see Figure 3.23). Make sure that you select to move both the log files and
the system files path. When you are ready, click Move. 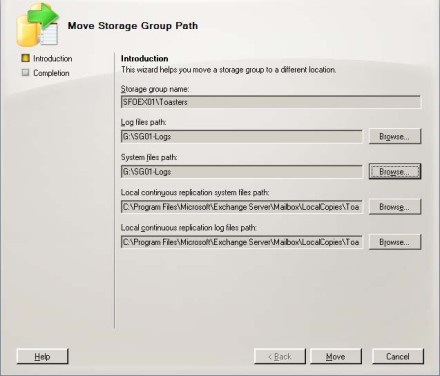 Once the wizard has completed, you will notice that the Completion screen includes the Exchange Management Shell (EMS) command that was used to move the log files and system files. The following is the command used to move the Toasters storage group files to the G:SG01-Logs folder: 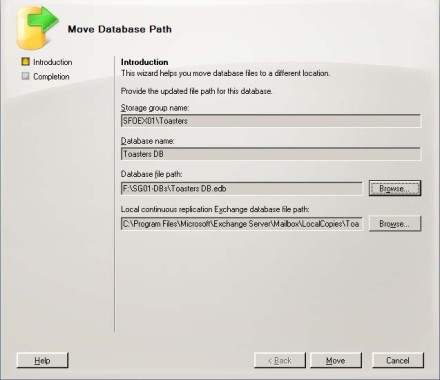 When the move is completed, the Completion page includes the EMS command that was used to move the database. In this case, to move the Toasters DB to the F:SG01-DBs folder, the following command was used:

You are reading tip #5 from "iSCSI SAN storage for Microsoft Exchange – 5 tips in 5 minutes," excerpted from Chapter 3 of the book "The Shortcut Guide to Exchange Server 2007 Storage Systems," by Jim McBee, copyright 2007, published by Realtimepublishers.