The Client Access Server (CAS) role basically accepts connections from a variety of clients to allow them access to the Exchange Server infrastructure. To some extent, the CAS role has some similarities to the old front-end (FE) servers in Exchange 2000 and Exchange 2003.

Exchange Server 2007 organizations running Exchange ActiveSync in conjunction with Windows Mobile 5.0 devices should consider installing the Messaging Security and Feature Pack on these devices in order to enable Direct Push. (Those of you familiar with BlackBerry devices and BlackBerry Enterprise Servers (BES) will recognize this as an obvious attempt by Microsoft to provide the same level of always-up-to-date email synchronization that BlackBerry users have enjoyed for the past 10 years.)

The Microsoft Outlook client would then authenticate against the CAS server, which in turn would use information from Active Directory and other sources to build an XML file based on the client's email address and logon identification. This XML file is passed back to the Microsoft Outlook client, which updates its profile with the correct information.

While we're on the topic of client access, I should probably point out the difference between the premium edition of OWA and the new OWA Light. The premium edition of OWA includes features such as voicemail configuration, search, a browsable OWA address book, Windows SharePoint Services integration, file system integration, spellchecking and a Scheduling Assistant for booking meetings.

OWA Light drops most of these items and provides a simple, plain-text-only Web-based email client. I suspect that the Exchange Server hosting community had some involvement in driving for two different flavors of OWA -- this enables them to offer a low-cost basic Web client along with the opportunity to up-sell customers to a feature-rich Web-based client. 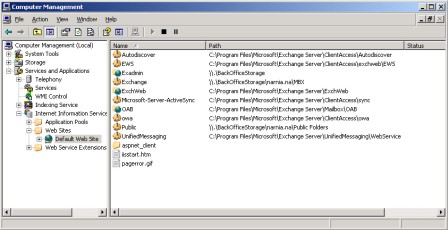 You'll see in Figure 2 that there are a number of new virtual directories created in Microsoft Internet Information Server (IIS).

Once you get into your migration, you'll need to deploy a Client Access Server role first within each Active Directory site prior to actually deploying any other Exchange 2007 server roles in that site. Because of the heavy load you can expect to hit your CAS server, I recommend you deploy one CAS server for every two Mailbox servers if you are deploying them on separate servers.