Messages also get to the Hub Transport Server by being dropped in the server's "pickup" directory by:

One last piece of functionality that is handled by the Categorizer is content conversion. For the first time in the history of Exchange Server, all messages that pass through a Microsoft Exchange environment now end up passing through a Hub Transport Server. This is, of course, absolutely vital from a compliance perspective.

Exchange 2007 also introduces the ability for Exchange Server administrators to configure disclaimers to be inserted either at the top or bottom of all messages processed by the Hub Transport Server, or to a subset of messages meeting specific criteria.

These disclaimers can even be added to messages which otherwise could not be modified (i.e., digitally signed messages, etc.). This is achieved by adding a new message envelope around the original message, demoting it to an attachment, and then adding the disclaimer to the new message.

Companies who use Microsoft Windows Rights Management Services (RMS) will be happy to know that they can use the RMS Exchange Agent and the Active Directory RMS Prelicensing agent to streamline the use of RMS with Exchange-based email. Users no longer are prompted for credentials for each message, and offline access to rights-protected Exchange Server data is now possible.

Transport Rules are another powerful new feature introduced in Exchange 2007. Think of them as akin to Outlook Rules for your entire Exchange 2007 organization. Transport Rules basically provide you with a vast array of actions -- including rewriting message headers, classification and journaling, bouncing the message back, or silently dropping a message. 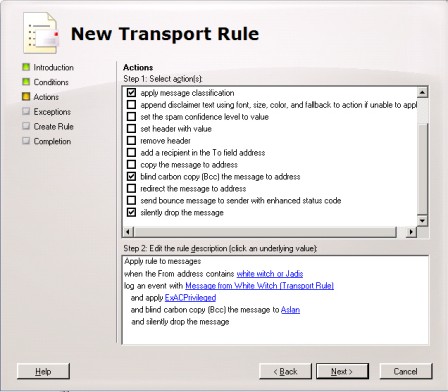 If you're designing your Exchange 2007 topology, you need to make sure you have at least one Hub Transport Server role in every Active Directory site that will contain the Mailbox Server role.