Accessing and using the Hardware Editor

When you created your architecture model, you specified hardware for up to three different types of servers. You also were given the opportunity to select various types of hard disks. However, it's somewhat unrealistic to assume that the wizard will be able to create a model that accurately reflects your network's hardware configuration.

Unless you're going to build the model network from the ground up, you probably have a variety of hardware in place, rather than just having a couple of different types of servers. The wizard also only gives you a limited number of choices regarding server hardware. There is a good chance that you are using hardware that isn't on the list; therefore, you must choose hardware that is similar to what you have.

The Model Wizard is useful in creating a model that is somewhat similar to your network. The Hardware Wizard lets you fine-tune that model to accurately reflect the server hardware that you're using.

If you wanted to change an object within the model, such as a site link or a usage profile, you could double click on the object that you want to modify to expose its attributes. But the Hardware Editor works differently.

The Hardware Editor is divided into two sections:

Figure 13 gives an example of how the Hardware Editor works. I selected the Device Configuration section and CPU as the device type. I then clicked on New Device, which lets me edit and specify CPU attributes, such as manufacturer, speed, number of processors, number of cores, cache sizes and bus speed. Choosing a single disk or a disk array as the device type, rather than a CPU, would produce a similar screen with options appropriate to the device type selected. 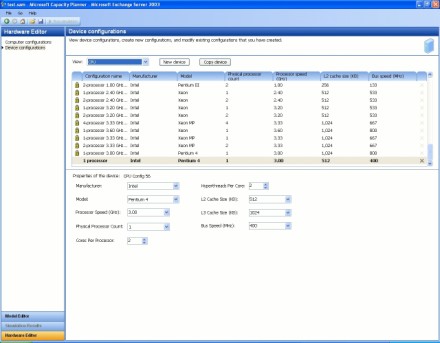 After you define components, you can define a computer based either on the predefined components, custom components or a combination of the two. To do so: 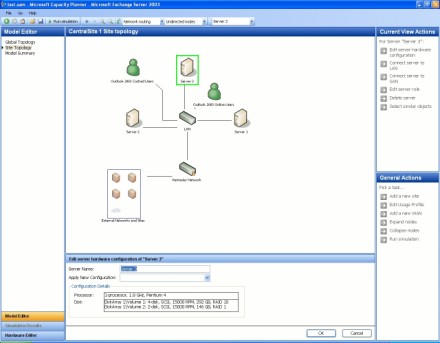 Figure 15. The Model Editor lets you specify the exact hardware configuration for each server in your Exchange organization.

If you look at the editor at the bottom of the screen, you will notice that the first option is the server name. By default, the Model Editor fills in a generic name -- Server 3, for example. Replace this generic name with the real name of the server that you are simulating. This will help clarify your simulation results.

The Configuration Details section of the editor shows the server's current configuration. However, you can use the Apply New Configuration dropdown list to select any computer defined within the Hardware Editor. This allows you to simulate hardware for each individual server in your Exchange organization fairly accurately.

Another factor that could potentially prevent Capacity Planner from accurately simulating your server's performance is that it assumes that the hardware is dedicated to run Exchange Server. If the server is running other applications or services, those processes will consume server resources and diminish server performance to some extent.

At this point, your model should be an accurate representation of your actual network. To check:

Figure 16. The Capacity Planner gives you an error messages when a portion of the Exchange organization cannot handle the anticipated workload.

Capacity Planner allows you to look at "what-if" scenarios. For example, the simulation alerted me that my Internet connection was too slow. I could tweak my model and rerun the simulation to see if doubling my connection speed would solve this problem.

System Center Capacity Planner can also test the effects of future growth. For example, if you were asked if adding another 150 users to your Exchange Server organization would cause any problems, you could use the Capacity Planner to find the answer.

This tool could build a model of your existing Exchange Server organization and test the effects of adding users. Doing so would tell you if your Exchange organization was up to the task; it also would show you what problems could occur if your current deployment isn't adequate. You could then use these simulation results to justify additional hardware purchases.

HOW TO DESIGN AN EXCHANGE SERVER ARCHITECTURE MODEL