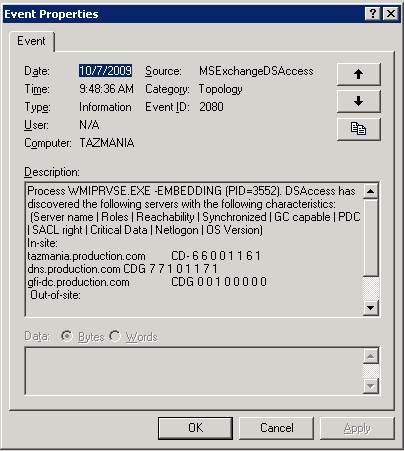 The server roles section explains which Active Directory (AD) roles a domain controller should perform; the Reachability field confirms the server's ability to interact with those roles. If you look at the figure above, you'll notice that my server, Tazmania.production.com, has a reachability code of 6.

This means that DSAccess can communicate with the domain controller through port 389 and that it cannot use the server as a global catalog by communicating with it over port 3268. If you look back at the roles for this server, you'll notice that it is not configured as a global catalog server; therefore , the reachability code is consistent with the Roles codes.

If you look at the server GFI-DC.production.com, you'll notice that it has a reachability code of 0. This means that the DSAccess service cannot communicate with the server at all. This is completely inconsistent with the server's role codes. This would indicate a serious problem had I not taken the server offline intentionally.

In order for an Exchange server to access Active Directory, it must have access to all three server roles. These three roles don't need to exist on the same server, but they do need to be defined on domain controllers that are either in the same AD site as Exchange or in a site within close proximity to Exchange.

Do you know a helpful Exchange Server, Microsoft Outlook or SharePoint tip, timesaver or workaround? Email the editors to talk about writing for SearchExchange.com.